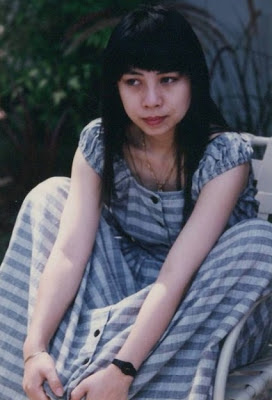 Even though she put modeling behind her when she left her native Malaysia for the US over 20 years ago and went into fashion design and later real estate, there still seems to be something about Maggie Tan to suggest she’s a former model. It’s evident in the candid photo at left, which was taken just a few years ago.

Currently a very successful and acclaimed realtor residing in the San Francisco Bay Area, Maggie doesn’t speak much about her modeling days anymore. However, the former “Miss Shell Motorcycle” did agreed to a brief interview with me that would delve a bit into her modeling past ….and she asked if I was interested in buying a home.

CHRIS CHARLES: I know you were born in Malaysia. Did you start modeling there?
MAGGIE TAN: Yes, when I was 17.
CHRIS: When did you come to the US?
MAGGIE: In 1988.
CHRIS: So What was your most memorable photo shoot?
MAGGIE: Probably the one where I was woken up at 6:00 in the morning and had pictures of me taken with no makeup on and still half asleep.
CHRIS: I saw a photo of you when you were younger, as “Miss Shell Motorcycle.” Was that one of your first modeling jobs?
MAGGIE: Yes, that was for a motorcycle racing event.
CHRIS: I really liked the red and yellow Shell outfit you were wearing. Did you get to keep it?
MAGGIE: Haha! Yes, but I threw out a large box with a lot of personal items in it, including old photos from my Grandpapa. Didn’t even open the box before I threw it out. Regrets now but too late.
CHRIS: That’s too bad because you looked great in that outfit. I see you’ve also done runway modeling?
MAGGIE: Yes, I was one of the shortest models (laughs). I remember having a wedding gown sent from Paris to be displayed in Malaysia. I was to wear it but they had to do quite a lot of adjustments for it to fit me.
CHRIS: Have you done any professional modeling after moving to the US?
MAGGIE: I didn’t do any in the US. I went to fashion design school. I’ve worked with several notable designers, such as French couturier Jacqueline DeBray.
CHRIS: So, what are your hobbies and interests?
MAGGIE: I love food. I love to eat. I love people and I love beautiful things. I enjoy doing arts and crafts.
CHRIS: You’re also a licensed real estate broker?
MAGGIE: Realtor not a broker. I don’t break things (laughs).
CHRIS: So, if the project were to your liking, any chance you’d get in front of the camera again?
MAGGIE: No. I’m now very camera shy. I started that way but modeling pulled me out of my cave. Now I’m back in it. No more photos of me after 40. Now it’s only photos of food (laughs).
CHRIS: Well, I’ll look forward to your food blog in the near future. It’s been great talking to you Maggie and thanks again for taking time for out for this.
MAGGIE: Sure, thank you, Chris!

The above circa 1940 video of Chinese-American burlesque queen Noel Toy performing her famous fan dance, makes it clear to see why she was was often billed as “The Chinese Sally Rand.” Undoubtedly the most