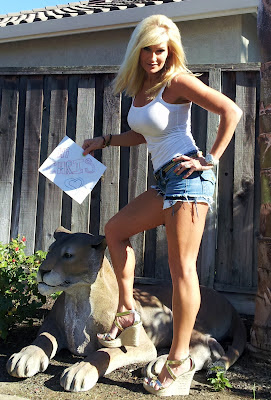 East Bay Area fitness model Dayna Fuller first caught my attention after I saw a photo of her in the gym, next to her workout partner, KPIX’s Roberta Gonzales. I had the pleasure of interviewing Roberta for this site in January of this year and considering her achievements, I knew Dayna couldn’t be any slouch to keep up with her in the gym.

I figured Dayna was a lady who was serious about her workouts and after contacting her about being featured here, I saw I was right. Despite having a fun and goofy side to her, Dayna doesn’t take fitness lightly. Even though she’s not currently competing (but is considering getting back into it), she spends five days a week in the gym and out on the running trails ….and the photo at left shows that’s definitely no exaggeration.

Also an avid sports fan, Dayna’s done promotional modeling for the Oakland Raiders and is a season ticket holder. She also frequents A’s games to cheer on the green and gold. Her “lighter” activities include river rafting, compound bow shooting, and of course, collecting photos of five-star hotel restroom toilets.

CHRIS CHARLES: Thanks for doing this Dayna. As you know, we have a friend in common, KPIX’s own Roberta Gonzales.
DAYNA FULLER: Hi Chris. Yes, Roberta is a very dear close friend of mine and quite the amazing and energetic woman!
CHRIS: I’ll sure concur with that. You and her trained together and ran in the Paris Marathon?
DAYNA: Yes we did. What a wonderful experience it was on so many levels. It was technically my first full marathon. I say technically as two weeks before Paris we signed up for the Oakland running festival relay but felt so good we ran the whole race minus the first five miles.
CHRIS: I asked Roberta this, but she said she isn’t. So, how about you; are you a regular Bay to Breakers runner?
DAYNA: I have not ran the Bay to Breakers. I ran a race in San Francisco quite a few years back and don’t recall which one it was.
CHRIS: Well, if you ever do run the Bay to Breakers, you’ll never forget it. So, I read on your Facebook profile that you’re a Harvard and Yale alumna??
DAYNA: (Laughs) No, that’s the goofy side of me that has that on there.
CHRIS: Yes, I suspected that ….since neither are located in Las Vegas, as you stated. (Dayna still laughing) So, tell me about the fitness competitions you’ve participated in.
DAYNA: I competed in the NPC (National Physique Committee) Figure Sacramento in 2002 and 2003. What an experience. The dedication it takes to train and diet for it is intense and very gratifying. Figure was pretty new at the time I competed so the competitors were compared more to bodybuilding women.
CHRIS: Have you ever considered “crossing the line” and going into competitive bodybuilding?
DAYNA: Not for quite awhile since then. Been doing more races instead. I love trail races. Beautiful in the outdoors. I’m a nature lover. I’ve been toying with competing again recently. But definitely not bodybuilding. For me, I prefer the look of figure.
CHRIS: I see. So you’ve also do some modeling?
DAYNA: Yes, some modeling, some radio, and a commercial.
CHRIS: What other sports are you into?
DAYNA: I’d mainly say running right now. I’m really working on gaining knowledge and training harder. Upping my intensity and confidence level. Then choose what I’ll do next. Training is what brings out the best in me. I love it! Running, weight lifting, weighted backpacking and trying new things to shock my body
CHRIS: What’s your workout routine like?
DAYNA: It varies from day to day but I hit the gym five days per week for weights/plyo/cardio of some sort. Love hiking and backpacking in the evenings. I run distance outdoors on weekends and hike. I also do shorter runs during the week.
CHRIS: Wow, no wonder you can keep up with Roberta. So, what are your other hobbies and interests?
DAYNA: I decided to take up learning to shoot a compound bow, not to hunt though, and I love river rafting! Kayaking is a must-do on my list as well.
CHRIS: I understand you collect photos of hotel restroom toilets. How did that come about?
DAYNA: (Laughing very hard) You’re seeing my crazy goofy side again! I think I do or say what most people won’t. The toilet photos just kind of started with me being in Las Vegas and thinking about Facebook and pics people post of themselves and places ….so of course my mind went to the toilet.
CHRIS: Well, I guess that’s better than the gutter. I see you’re a huge A’s and Raiders fan. Did you grow up as one because you were born and raised in the East Bay?
DAYNA: I was born in Southern California and lived in East Bay since I was four years old. Being the sports fanatic has been fairly new and progressing for me. Kind of shocks me actually. I’m a season ticket holder so try to make most of the games. And except for yesterday, I cant get enough of the A’s games! Roberta has gotten me quite into hockey as well. I did some modeling …I guess that’s what you would call it, for a bunch of the older Oakland Raiders players for autograph shows.
CHRIS: How often can you be found at the Oakland Coliseum cheering on the A’s?
DAYNA: I’m bad. Been watching from home or listening on Ipod at the gym and of course 95.7 The Game when driving. I’ll be attending some games with Roberta in the next few weeks.
CHRIS: Well, now you no longer have to envy Roberta for being featured at this site, Dayna, as you’re now among the ranks of the ladies who’ve had the privilege. Thanks again and in closing, any shout-outs to anyone? 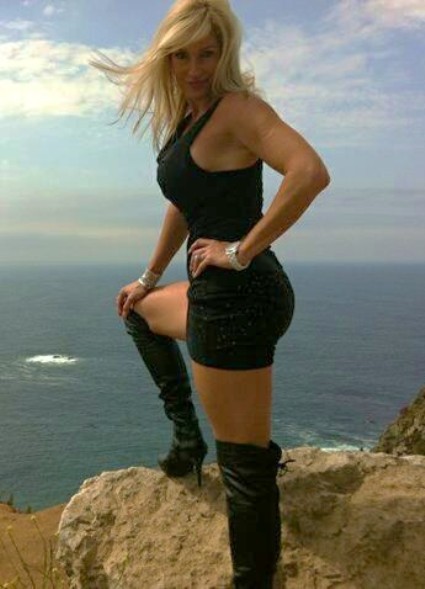 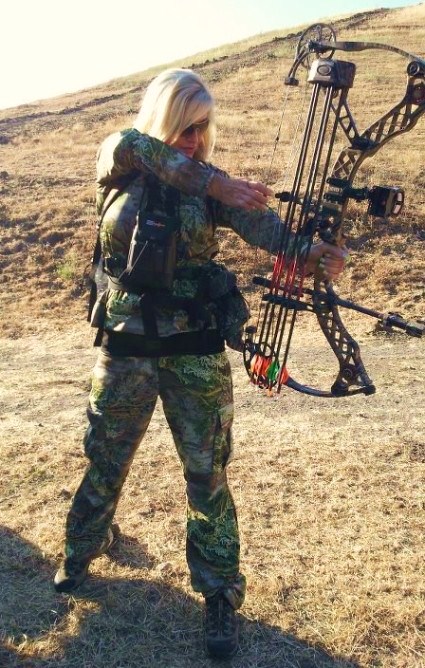 “Bambiinator” on the hunt. Dayna’s mother was also a “badass” with the bow but it
was with a recurve, not a compound, as Dayna’s seen here with. Her mom took
50th place at the 1984 Olympic trials for target archery.

Filmmaker and actress Mary-Madison Baldo (who’ll ask you to call her Madison, not Mary) has all the makings to realize her dream of hearing her name announced at the Oscars someday. Besides her talents, the