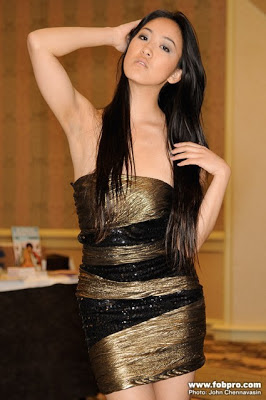 Besides being a model herself, Kasumi Shimizu is also the manager of the Los Angeles division of model networking company My Elite Models. Born and raised in Southern California, her talents include traditional Japanese dance and being quite skilled on the basketball court, especially for a girl who stands, as she puts it; “a proud 5′ 3”.

I was very impressed by Kasumi’s photos. Both the ones where she’s donning traditional Japanese outfits, as well as those of her in modern dress, such as the one at right, which is from her appearance at Glamourcon 2010. I contacted her about an interview a couple of months ago and she graciously agreed then, but because of her busy schedule and final exams, she wasn’t able to get back to me until just recently.
CHRIS CHARLES: First off, thanks for giving me this exclusive interview, Kasumi.
KASUMI SHIMIZU: No, thank you! I have been really eager to get this interview going!
CHRIS: It’s my pleasure. So, I know you currently live in Los Angeles. Were you born and raised there?
KASUMI: Pretty much. Most people think I’m from Japan but I was actually born in Santa Monica raised in Culver City, so I’m really a California girl!
CHRIS: What’s your ethnic background?
KASUMI: I’m Japanese-American
CHRIS: What are your hobbies and interests?
KASUMI: Although I don’t really look it…I’ve been playing basketball my whole life. I’m also a gamer, love the outdoors (skiing, hiking, camping, etc) and dance. I have done some ballet and tap but my main focus has been traditional Japanese dance or “nihon-buyo” (think sort of like Memoirs of a Geisha). In the next year or so I hope to go to Japan to take the “nattori” test for dancers who want to get their Masters.
CHRIS: Wow, you do look athletic but I wouldn’t have guessed basketball is your sport. So, how did you get started modeling and how long have you been doing it?
KASUMI: I have always been interested in modeling but because I am short, a proud 5′ 3”, and did not use to see many Asian faces in the media, I did not think I had a chance in the industry. But I started to talk to different people and after a hundred “No” answers, I finally got a “Yes” and have been working my butt off since!
CHRIS: I see that your portfolio includes many styles such as fashion, swimsuit, and traditional Japanese. Do you have a favorite?
KASUMI: Not really. As a model you’re sort of one of those actresses in a the old movies without any sound. You really get into character and every shoot is a really unique and different experience.
CHRIS: Have you invested a lot of money in your wardrobe for your modeling shoots?
KASUMI: Haha, sort of. Modeling has definitely encouraged my already really bad shopping habits. I tend to buy a lot of clothes for myself and the pieces somehow get used for modeling shoots, too. They now have a dual-purpose! (laughs)
CHRIS: Any particularly memorable shoots or locations?
KASUMI: I would say my guerrilla model shoot was pretty memorable. The photographer and I would travel the city at night and shot at some really interesting locations. One spot was in a really dark area where you could not see your hand in front of your face. So I would pose and wait for his flash to go off before finding a new spot or making a new pose. It was pretty exciting!
CHRIS: Do your plan to branch out from modeling into other forms of show biz?
KASUMI: I have been asked to do some acting and have also considered go-go dancing! We will see what else the future holds …stay tuned!
CHRIS: Well, I’ll definitely keep an eye out for you. As I told you, I’ll be sharing your feature at Asian Sirens. Have you ever heard of the site before?
KASUMI: Yes, I’ve heard of Asian Sirens through a few friends before and I look forward to seeing my feature there, as well.
CHRIS: In closing, anything you’d like to say to the readers or any shout outs to anyone?
KASUMI: It’s an honor to be featured and I want to thank all my friends and family for supporting me through all my endeavors. I love you all!! 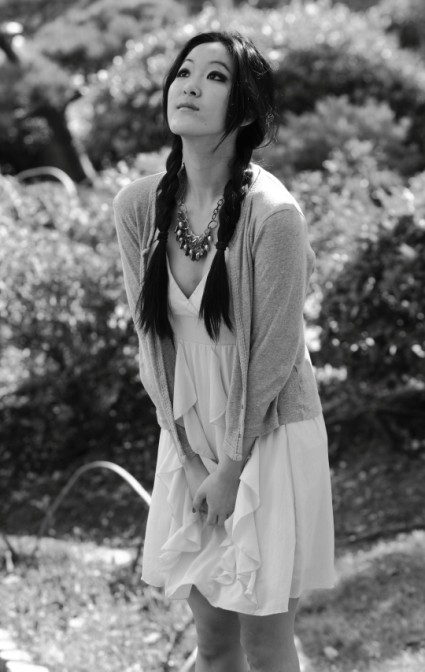