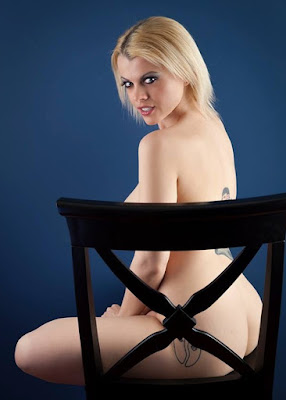 I first heard of Nadia White last year, when I was doing a piece on Bianca Allaine’s then-recently announced comedy-horror film Zombinatrix. Nadia was listed in the cast when the film first hit IMDb, and that was reinforced by Bianca in her first video promo for the film. However, whatever agreement was made  for Nadia to appear in Zombinatrix, fell through months ago. Judging from Nadia’s on-camera performances, in which she shows she’s definitely not one to shy away from physically demanding scenes, in both her adult and horror films, it’s Zombinatrix’s loss.

Even though the Baltimore-area native is still active in the adult industry (doing strictly fetish films now, she tells me), Nadia has made the transition from “porn star” to actress. With titles like Milfs vs. Zombies, Radioactive Flesh Eating Foliage, and Return to Nuke ‘Em High Volume 2 to her credits, she’s been making quite a name for herself in the indie horror industry over the past year. She recently finished filming her scenes for Shawn Burkett’s Don’t Fuck in the Woods, and has a good list of upcoming films she’ll be appearing in that are slated for release throughout this and next year. Above photo courtesy of Steve Webb.

CHRIS CHARLES: You live in Frederick, Maryland. Were you born and raised in Maryland?
NADIA WHITE: Yes I was.
CHRIS: How did you get started modeling?
NADIA: I was a fan of a DC-based photographer, Larry Bradby, and he offered to shoot me once I turned 18.
CHRIS: You’re best-known by some as adult video actress Nadia White and Ariel Adore. I don’t have a whole list of questions I’m going to ask you about your adult industry work, but I would like to touch on it it it’s alright with you?
NADIA: Sure thing, I’m still active in the industry.
CHRIS: Ah, okay. According to the Internet Adult Film Database, you appeared in eight full-length features between 2008-2015 and, which led me to believe you were retired from doing hardcore.
NADIA: I am still active, but I do only fetish films now.
CHRIS: I see. As you probably know, Kink.com is a big adult video production company and based here in San Francisco. I searched their site and see you haven’t done a shoot with them. Would you like to and if so, for which of their sites?”
NADIA: I’ve worked for Infernal Restraints, which is in Oakland. I would love to shoot for Kink. Any of the sites, just not “Everything Butt.”
CHRIS: I’m not familiar with that one, but from the name of it, it’s easy to figure out what that site’s about. So, I assume you wouldn’t shoot with them because anal just isn’t your thing?
NADIA: They fist and all that ….I mean, I’ll do it to other people ….not an issue, but not for me!
CHRIS: Gotcha. So, are you officially retired from the adult industry and now focused on your acting career?
NADIA: I still star in and film my own content, along side my mainstream work.
CHRIS: In a nutshell, what would you say were the pros and cons of doing adult videos?
NADIA: Pros, it’s empowering, fun, and can be a very positive experience if you keep your nose clean. Cons, your family and friends WILL find out …be prepared.
CHRIS: You’ve done many kinds of photo shoots and a wide range of themes. What have been some of your most memorable shoots?
NADIA: Oh, anything involving rope bondage, latex, and body paint.
CHRIS: Is there any type of shoot you haven’t done so far, that you particularly want to do?
NADIA: I would like to do more FX/Gore-style shoots.
CHRIS: You were in a three-part episode of the TV series Selfgags, entitled “Pandora & Nadia in: The Taming of a Rebellious Brat.” Tell me what that was about.
NADIA: It’s always fun to work with Pandora, we are great friends. In this shoot, I played the part of a rebellious girl who needed to learn some manners, thankfully Pandora had no problem in showing me the righteous path away from my evil ways.
CHRIS: You were listed to appear in Bianca Allaine’s upcoming Zombinatrix shortly after it was announced, but that fell through. Care to say why?
NADIA: I’m still in the dark on this project.
CHRIS: You recently finished shooting your scenes for Shawn Burkett’s Don’t Fuck In The Woods. What can you tell me about that one? I mean, did anyone fuck in the woods anyway?
NADIA: Haha, this was an awesome project to work on, we had SEVERAL setbacks, but we are wrapping up this month. I’m very stoked to see the finished project. I have a gory death. No, not to the best of my knowledge no one did (fuck in the woods).
CHRIS: You’re involved with several upcoming films in various stages of production. What are you currently working on?
NADIA: Killer Campout, Skullbutcher, Noctambulist, and several other shorts.
CHRIS: So far, what film has been the most fun for you to work on?
NADIA: All of them of course!
CHRIS: Have you been a horror fan since you were a child?
NADIA: Most defiantly.
CHRIS: Do you have any favorite Scream Queens?
NADIA: No, but I’m a big Kathy Bates fan.
CHRIS: Who have been some of your favorite people to work with on either side of the camera?
NADIA: George Stover, Brittany Blanton, Lloyd Kaufman.
CHRIS: Is there anyone in indie films, on either side of the camera, whom you haven’t worked with yet, but would love to?
NADIA: Oh, this is a tough question. I don’t think I have an answer right this second. I just want to work with as many people as I can.
CHRIS: Have you attended many horror or comic conventions?
NADIA: I love cons!
CHRIS: Have you ever had to deal with any stalkers or obsessed fans?
NADIA: Not yet, and I hope it stays that way.
CHRIS: Do you have an hobbies or skills that people not close to you are unaware of?
NADIA: I play saxophone.
CHRIS: Love to hear you sometime. With that, I thank you again for doing this and look forward to having you on the pages of Idol Features, Nadia. In closing, any shout-outs to anyone?
NADIA: Just thanks to all my friends and loved ones for all the support, and who have stood by me with all my shit.
See more of Nadia at:
Her IMDB Page
Her Facebook Fan Page
Model Mayhem
599

I‘ll admit, I’d never heard of Tristan Risk until I saw the movie American Mary, in which she played Beatress Johnson (yes, “Beatress,” not “Beatrice”), a stripper who had 14 surgeries to become a real-life Betty Boop look-alike.

Above is the “Anime Princess of Burlesque” Stella Chuu, performing her act entitled “The Darkest Corners of the Internet,” which is her homage to the infamous website 4chan.org and the notorious Internet meme it popularized;