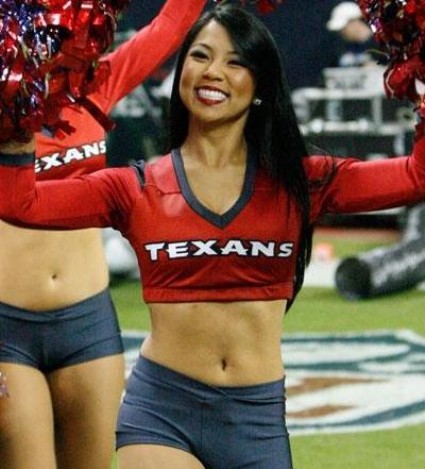 The National Football League Kickoff game next month will mark the beginning of the 2010 NFL season, so after checking some of the teams’ player rosters for this upcoming season, I decided to check all of the the teams’ cheerleader rosters.

Of the 25 NFL teams that have official cheerleading squads (7 teams don’t), I did find several Asian ladies among the members, one being Duyen (above), who proudly high kicks and shakes her pom poms for the Houston Texans. 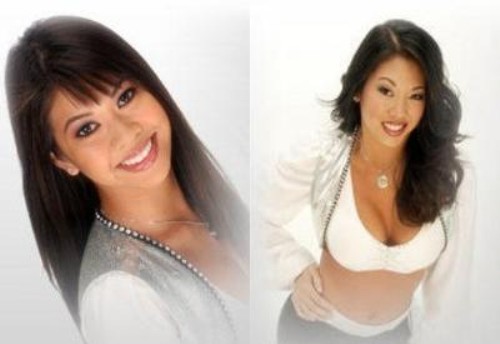 While doing my research, I was disappointed to find that former Oakland Raiderettes Tiffany and Cyrina (above) were no longer with the squad. However, even though I wanted this entry to be only on current cheerleaders, they deserve a mention here since I fondly recall meeting them in 2006 when the visited Korea for an Armed Forces Entertainment show. Me with Cyrina here.

(Note: There may be some other current NFL cheerleaders who are part-Asian that I haven’t included in this entry because, since I really couldn’t put a finger on all of their ethnicities, and they usually don’t list them or their family names on their bios, I “played it by eye” and decided to only include ladies here that are unmistakably Asian.)

Some Hooters Girls start blogs during their employment with the company. Most who do, start them at the beginning of their journey into the “delightfully tacky, yet unrefined” world of breasts and Buffalo wings.

Gravure idol Risa Kudo, and the supporting cast of the 2008 gore-fest Zombie Hunter Rika, prove when it comes to comedy-horrors with cheap special effects, bad acting, and T&A, the Japanese are second to none.