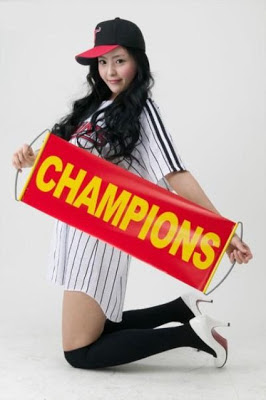 Unlike professional baseball teams in the United States, all of the teams in the KBO (Korea Baseball Organization) have their own professional cheerleaders, stirring up the fans on both sides of the park during games. At right is the captain of the LG Twins squad, Kang Ye-jin, who’s currently the best-known pro baseball cheerleader in Korea and is expected to branch out to other avenues of show biz in the near future. Oh, and despite what Ye-jin’s banner reads, her team didn’t even make the playoffs last year and are currently in 6th place out of only 8 teams in the KBO, which means at every Twins game, she has her work cut out for her.

What follows is just a sample of the girls from each team in the KBO and the outfits they wear. (They usually change at least once during games.) The whole squad doesn’t cheer at every game. There are usually four girls cheering at an average game but I’ve seen at little as two at some games and as many as six at others. Also, Korea isn’t unique by having pro baseball cheerleaders. Japan does as well and There will be a follow-up here on their Japanese counterparts in the near future.

(Author’s Note: A word of advice for those planning on taking in a game to catch these ladies in person while in Korea: In some stadiums, the cheerleaders are stationed along the baselines, in others, they’re in the outfield stands, so you should make sure where the cheerleaders will be in the stadium you’re at before buying your ticket.)

This video is a few years old and the quality isn’t great, but I choose it because I
shot it and I love the Wyvern girls’ routine to Little Richard’s “Tutti Frutti.”

The Last of the Derrick Dolls

In 1996, when the city of Nashville, Tennessee was courting the then-Houston Oilers to move to Music City (and become the now-Tennessee Titans), some of the Oilers Cheerleaders, the “Derrick Dolls,” made this promotional appearance at the Nashville City Fairgrounds.

Even though their music is usually harder and not compatible with the sound of the more “bubble gum” girl groups that are so popular throughout Asia, some Asian all-girl rock bands, that are the real deal, have earned international fan bases.