Spawned by the popular Super Bowl halftime feature, the Lingerie Bowl, the Lingerie Football League had its inaugural season just last year. Having sexy, lingerie-clad players was probably thought to be the only way a womens football organization could survive, but these ladies aren’t merely eye-candy in some powder puff league. In fact, some of the players even have semi-pro experience.

In the LFL, the ladies play all-out, full-contact football for two 17-minute halves on an indoor arena-size field under arena-type rules. However, you’re not here to read about all that, so anyway ….browsing the rosters of the 10 teams revealed a handful of Asian gridiron girls, most notably Korean-born G-N Kang (at right and yes; she uses a hyphen in her name), who plays center for the Philadelphia Passion. G-N’s “day job” is co-host of the “Chio in the Morning” radio show on Philly’s Wired 96.5 FM. 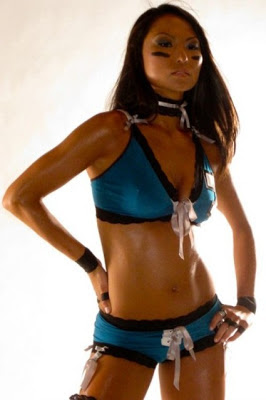 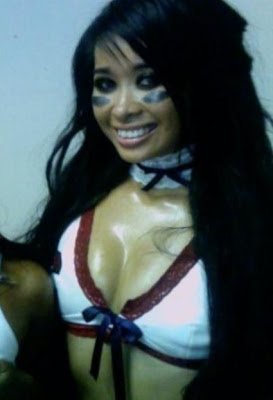 At left is the other Korean-American lady in the LFL, who also happens to play for the
Passion, running back/cornerback Kimberley Wheat. At right is New York Majesty
defensive linewoman (whom I’ve also seen play offense) AJ Nguyen. 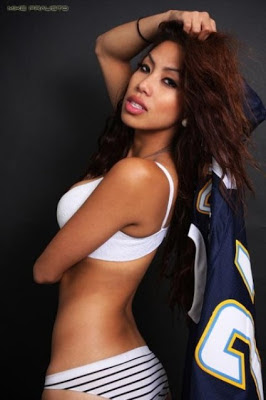 Left is another of the many players in the league who serve double duty by playing on
offense and defense, is wide receiver/safety Rica Manalastas of the San Diego Seduction.
At right; cornerback Laura Santos of the Denver Dream.

Some highlights of the New York Majesty vs. the Philadelphia Passion. Glimpses of New
York’s AJ Nguyen (#13 in red with the long, black braids) and Philly’s G-N Kang
(#8 in green) are both shown in this one.