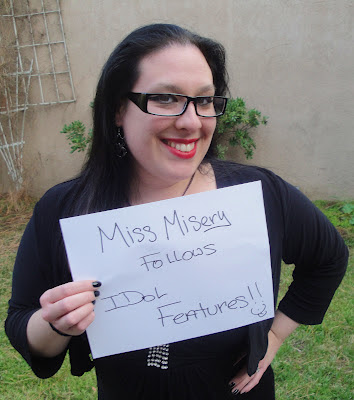 Since my last visit with San Francisco horror hostess Reyna Young, aka Miss Misery, she’s earned an even higher profile among Bay Area horror aficionados. Her weekly TV show, Miss Misery’s Movie Massacre (viewable throughout California on AT&T U-Verse) has quickly gained over 10,000 viewers, so far. Besides the classic horror and sci-fi movies she features on the show, her guests include some of the top names in the independent horror film industry, comic book authorities, as well as segments with fellow horror personalities and local celebs.
I recently caught up with Reyna for an update (and a little exclusive info) on her upcoming convention, “Miss Misery’s Days of Terror” which is being held next month in Sacramento.
CHRIS CHARLES: I know you’re busy preparing for your horror convention in Sacramento next month, “Miss Misery’s Days of Terror.” How hectic has the planning been?
MISS MISERY: It’s been hectic but I love it! I’ve never run a convention before so when I was handed this I was super excited. It’s been a challenge and I’ve learned so much from it. I and Last Doorway Productions are all doing our best to bring the fans a good show and I hope we achieve that goal. This convention use to be the Sacramento Horror Sci-Fi Show and it’s been around for about six or seven years. I believe, I’ve given it a full makeover and I’m very proud of it.
CHRIS: Who was the hardest guest to get? 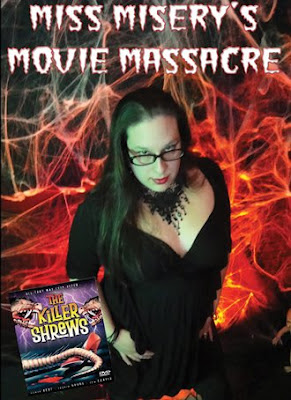 MISS MISERY: Well I really wanted Jamie Lee Curtis ….maybe in the future you never know. The guests are people I know and people I don’t know. It’s just all about getting feedback from the fans and then e-mailing the potential guests or their agents. I received numerous e-mails from fans about who they would love to see but most of those guests were booked or out of town or busy. I’m very happy with our line up of Ari Lehman (Friday The 13th), Amy Steel (Friday the 13th Part 2), Eileen Dietz (The Exorcist), Lynn Lowry (The Crazies), and I did bring in a lot of independent horror artists to promote their stuff. I love to promote whoever I can. I also booked a bunch of local celebrities to come out and promote everything they do. Like Mr. Lobo, Mike Hampton, and Kaci Hansen. I have a great group of people coming out. I’m so excited!
CHRIS: Sounds like an outstanding event. Anything you can tell me about it that hasn’t been included in the press releases? A surprise guest or guests perhaps?
MISS MISERY: Okay, only for you ….right now we have not announced our other guest yet but I will for you. It is Suze Lanier-Bramlett of The Hills Have Eyes! We’re happy that she’s coming out and I cannot wait to meet her!
CHRIS: Thanks for that exclusive info! (Remember; you read it here first!) Oh, during our last interview, you mention the Queen Anne hotel as a cool place to stay in San Francisco and I agree. That hotel has quite a history, particularly room 401, and because of that history, it’s probably very difficult to reserve that room, especially for Halloween, even if one can afford the rate it must go for. I didn’t ask you if you’ve ever stayed there and if so, was it in room 401?
MISS MISERY: I have not stayed in that room nor the hotel, Umm, I was born with a sixth sense. It’s something I was always embarrassed about but have started to talk more about it within the last three years. I’ve lived with a ghost all my life who stays by my side and I also hear them and feel them and I do get bothered by them. It has been a bit of a burden. So it does get hard for me to walk into places where I can feel them and know they are there and there have been times where I couldn’t walk into a place and stay there for a certain amount of time because they bother me so much. It’s hard to explain so that’s why I have not done any ghost hunting for right now although I have been asked to a bunch of times.
CHRIS: I see. well perhaps, if you’re willing, we could talk about that more on at a later date. Anyway, you’re also hosting your “Movie Massacre” show on KCTH Channel 27 in the East Bay Area. How’s that been going?
MISS MISERY: It’s been great we’re on throughout California on AT&T U-Verse. We had over ten thousand viewers on the first episode so that was a shock and it felt great. I feel like after being in the horror genre for five years now I’m finally starting to come up in the world. It’s a great feeling to come home everyday and read fan mail and all these wonderful comments from people who love the show. I’m so glad people like the show. Miss Misery’s Movie Massacre took on a life of its own and will continue to grow and entertain my fans everywhere.
CHRIS: In addition to the movies, you also have guests?
MISS MISERY: Yes, I have guests who come on. I’ve had Cleve Hall (Monster Man), Sherezada Kent who’s a terrific filmmaker, Alexia Anastacio who’s another great filmmaker and also Jason Dube from Scattered Comics. I have guests, skits, segments with Mr. Torture and Lord Blood Rah and now in season 2 coming up we’re introducing Ygor! We also show short films by independent filmmakers and comic book reviews.
CHRIS: Does the show make you feel like sort of a female Bob Wilkins? (Those of you who are horror fans from the SF Bay Area and have to Google that name find out he is, should really be ashamed of yourselves.)
MISS MISERY: No, I never considered myself a Bob Wilkins type. He did influence me and was a great inspiration and like any art, I take it as my own and try to have fun with it.
CHRIS: Well said. Speaking of Bob, did you ever get a chance to meet or interview him?
MISS MISERY: Unfortunately, I never got to interview him. I did get to meet him a couple of times at WonderCon in San Francisco when I was younger and he was great to talk to. Also, John Stanley and I have been friends for a long time. Both great men! 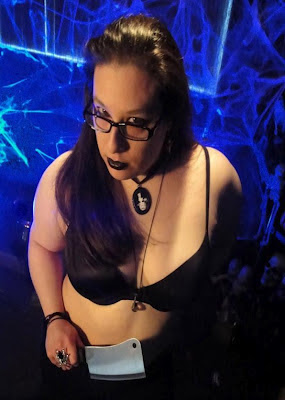 CHRIS: Yes, I loved watching Creature Features on KTVU as a kid. So, earlier this year, you did a photo shoot where you showed a little more skin than usual. Any plans do more like that?
MISS MISERY: Yes, I actually do have more photos like that, just don’t know if I’ll release them or not. I wanted to do something different since I usually cover up and I wanted to know if people would even accept me like that. It went over really well (laughs). I had a great response and my fans loved it. So maybe in the future we will see.
CHRIS: Do you already have your Halloween plans made?
MISS MISERY: October is looking pretty full for me but on Halloween, I normally chill, watch films, and relax or have a get-together with friends or go to friends’ houses. This year I’m not sure but I’m booked-up for events that will be announced soon. I love Halloween, I get to shop and dress up and it just feels good to be with friends and have a good time.
CHRIS: Always been my favorite time of the year. Well as always, I really appreciate you taking time out for this Reyna and I’ll look forward to seeing you in Sacramento next month!
MISS MISERY: Thank you so much for the interview. Always a pleasure and cannot wait to see you next month also. I would just like to thank all of my fans for their love and continuous support. You don’t know how much it means to me from the bottom of my heart. Thank you! Chris, you rock!! Also a big thank you to my husband and other half of Last Doorway Productions, John Gillette. I love you baby!

See more of Miss Misery at:
Miss Misery.net
Days of Terror.com
A Nightmare to Remember.com

Billed as “Your Cuddly Cadaver,” it’s plain to see why Marlena Midnite, one of the hostesses of WQAD Channel 8 TV’s Midnite Masusoleum, has such a loyal following in and around the Quad Cities area.

Sexy and macabre horror hostess Screamvina Ghoul can be seen at all the eerie events in and around her native Portland, “Horroregon.” She also lays claim to being the “second most evil woman in Portland.”