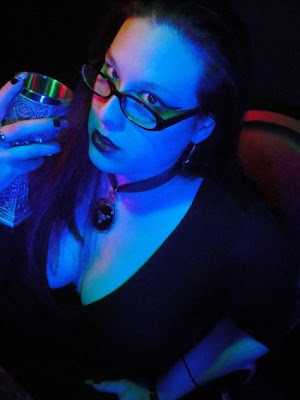 The San Francisco native and CEO of Last Doorway Productions has been horror hosting, as well as producing, writing and appearing in indie horror films for the last five years. You can catch Miss Misery in the flesh at local horror conventions and comic shows that she frequents, often interviewing horror-biz personalities for her Last Doorway Show. She also hosts her annual A Nightmare to Remember International Film Festival and occasionally stops by Creepy KOFY Movie Time to mix it with No Name, Balrok and the Cave Girls.

With Halloween less that two months away, Miss Misery’s plate is pretty full this time of year, but I was able to charm her into taking some time out from her busy schedule to do a brief interview with me.

CHRIS CHARLES: So, I have you to thank for being instrumental in setting me up with an interview with our now-mutual friend across the Bay; Scream Queen Debra Lamb.
MISS MISERY: Yes! Debra Lamb is awesome and I love hanging out with her. Debra was just in a short film of mine called Zombie Attack and she did such an amazing job. I love her.
CHRIS: Who are some other names you’ve worked with who would be known to horror fans?
MISS MISERY: I have worked with several people in the horror genre, especially when it comes to throwing events. I have thrown a “Women in Horror” Convention at Dark Delicacies in Los Angeles with Dai Green from HorrorNews.net. I have had the pleasure of working with several women from my women in horror documentary called Welcome to my Darkisde like Adrienne King from Friday the 13th, Lynn Lowry from The Crazies, Director Michelle Fatale of The Cleaner, Scream Queens Victoria De Mare, Monique Dupree, Brooke Lewis, Rachel Grubb and many more! Soon I will have the pleasure of working with Michelle Tomlinson in my upcoming feature called Forgotten Tales! I have also had the pleasure of interviewing over a hundred celebrities in the horror genre on my show called The Last Doorway Show. I have interviewed Gunnar Hansen from The Texas Chainsaw Massacre, James O’ Barr the creator of The Crow, Ted Raimi, Elvira, and Weird Al Yankovic. There’s been so many I can hardly keep track.
CHRIS: That’s quite a list! What are some of your favorite Bay Area-produced horror films?
MISS MISERY: Well, I am a huge fan of the independent scene and right now my three favorites to recommend that were shot in San Francisco are The Craving by Val Killmore Castro, Retardead by Rick Popko and Dan West, and also All About Evil by Joshua Grannal. I must say it’s hard and rare to find San Francisco horror films. Everything is usually shot elsewhere but these are some good films and Retardead is a horror-comedy that has you laughing non-stop!
CHRIS: With a title like that, I can imagine. San Francisco is rich with culture, and some of that culture includes the supernatural. Being a native San Franciscan, and given the field you’re in, I assume you’re familiar with some, if not all, of the city’s infamous ghosts? 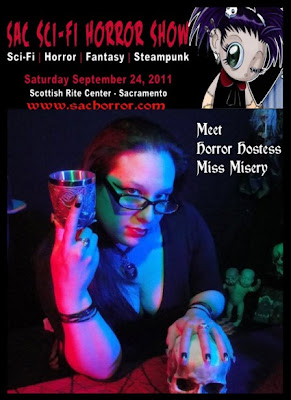 MISS MISERY: Oh, yes. In the Sutro Baths area an apparition of a woman is seen from time to time. There’s a little girl who haunts the Columbarium and at the San Remo Hotel there’s a young woman who walks the halls. There was a double murder there in 1911 I believe, so there are apparitions of men seen there. There are so many hauntings and stories that I can talk forever but those are just some out of the hundred that I know.
CHRIS: What are some of your favorite local “haunts”?
MISS MISERY: The Queen Anne Hotel is a good place to stay. I recommend it to all my friends who come into town and need a good place to stay. Plus it’s haunted. I never tell them that part until after they book their room (breaks out in eerie laughter). Alcatraz is always fun but I haven’t experienced anything paranormal from there yet. Also, the abandoned Army hospital in the Presidio from the 1890s. Ghosts are sent there all the time!
CHRIS: Ahh yes, room 401 at the Queen Anne. (Good luck reserving that room, especially on Halloween and even if you have the big bucks it goes for.) So, I was at your Nightmare to Remember film festival last June. There were some great short films featured, particularly Sprinkles with Brooke Lewis, who was also in attendance. Can you let us know who you have slated to appear at next year’s event?
MISS MISERY: As for right now, I cannot give out any information about next year’s guests but I must say it will be a major surprise when you hear who it is! We will still have a free raffle for the audience and the first 20 people in line will receive a blood bag filled with goodies. We are definitely growing every year and growing as a film festival. Next June will be out fifth year and one you will never forget! We are adding an audience award and will be giving away bigger prizes fort the 1st, 2nd and 3rd place winners of the films.
CHRIS: Speaking of guests, who have been some of the most memorable people you’ve interviewed for the Last Doorway Show?
MISS MISERY: WOW! There have been so many and yet they have all been wonderful and so sweet. Heather Langenkamp from A Nightmare on Elm Street was such a sweetheart, Adrienne King from Friday the 13th is an awesome woman, James O’ Barr was a dream come true since The Crow was always my favorite comic book. Weird Al Yankovic was a huge surprise and he is such a down to earth awesome guy. Lance Henriksen from Pumpkinhead and Alien was really cool, too and also Tony Moran who played the original Michael Myers from Halloween. I love that guy and Halloween was the first horror film I ever saw. Michael Berryman from The Hills Have Eyes. There are just so many I can name and they have all been so wonderful and I still keep in touch with everyone that I can.
CHRIS: Another impressive list of horror alumni. I occasionally run into Michael Berryman at the post office up in Clearlake, where we both have vacation “retreats.” So, anyone you’re dying to get but haven’t yet?
MISS MISERY: There are a bunch of people I want to interview but the one I really want on my show is Robert Rodriguez. I respect him as a director very much, he is really talented and he always has a great story to tell. I’m always entertained by his films and think he’s really cool. I would also love to interview Quentin Tarantino, Sam Raimi, Wes Craven, and John Carpenter would be nice! All men who have influenced me somehow, I’d like to thank them. 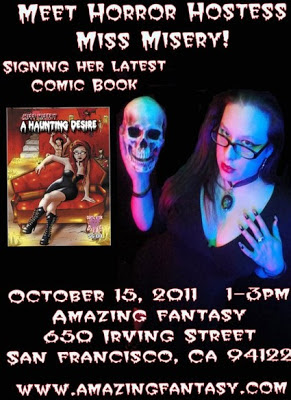 CHRIS: I understand you have a new show scheduled to debut on TV called Miss Misery’s Movie Massacre. What details can you give us on that?
MISS MISERY: Yes! I am so excited about this project, Miss Misery’s Movie Massacre is a two-hour show filled with fun and horror. Miss Misery will be hosting your favorite horror films like House on Haunted Hill or Night of the living Dead. It will be filled with fun segments like “Mr. Torture,” a segment that gives you some information about medieval weapons. We also have comic book reviews about your favorite and local independent comic books. Also, “Make-up with Melissa” will be a five minute segment where make-up artist Melissa Krimsky will be teaching you the viewers how to do certain make-up techniques. We will also be bringing you local horror stories from the haunted spots themselves and of course Fan mail! It is scheduled to air in a month on channel KCMC 28.
CHRIS: Duly noted. In closing, Halloween’s coming up. Where will Miss Misery be found?

MISS MISERY: October is a busy month for me so I will of course be running around filming, doing local conventions and gearing up for my 4th annual Zombie Prom. For more details on where it will be held, please check out LastDoorwayProductions.com. We will have three local bands playing including Dammit! and the Deadlies! There will also be a booth set up to take your prom picture and awesome vendors who will be selling Zombie merchandise. We will also have a king and queen crowning and of course, Miss Misery will be hosting this awesome event! 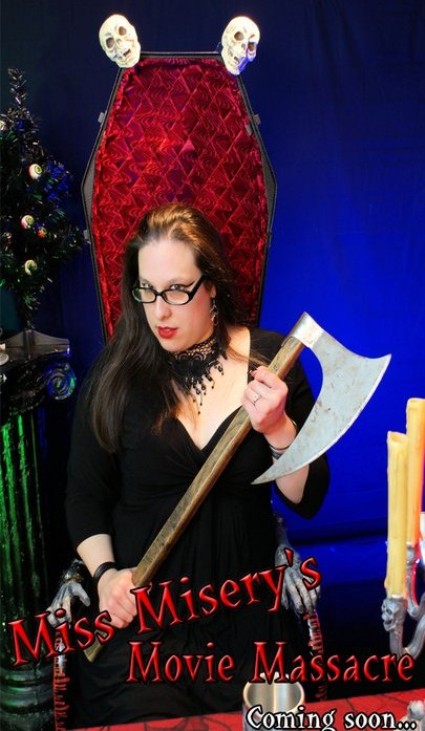 If you’re an Oakland Athletics fan and a regular at O.co Coliseum, then you’re probably at least casually acquainted with Jen Rainwater, known among A’s fans as the “Oakland A’s Socks Girl.” Even to say

Quad Cities Horror Hostess Marlena Midnite, of WQAD’s Midnite Mausoleum, was previously featured here in a short piece last February, in what was sort of a prelude to this interview.

Tales of Horror with Lilith Death

Lilith Death (played by actress Jessica Felice) isn’t your typical, campy horror film hostess, if you consider Elvira as such. Lilith delivers a more subtle humor and has been described as a flirty dominatrix-style vixen,