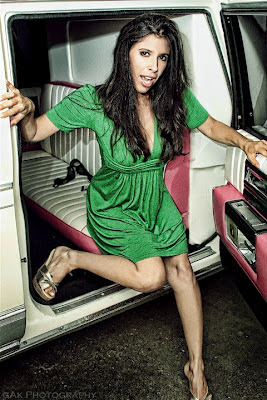 Felissa Rose played young camper Angela Baker, the silent girl with a mysterious secret, in the 1983 cult horror film Sleepaway Camp. It’s probably the role she will always be best-know for. Assuming she constantly gets questions about that film and her character, I suspected she may be sick and tired of answering them. However, after contacting Felissa through Facebook, I was surprised and pleased to find out that she is very proud to have been a part of what is now a must-have for any horror fan’s collection and has no problem talking about her role in it.

Of course, Felissa’s acting career is not limited to playing Angela, which was just her first film role. During the 10 year gap between Sleepaway Camp and her next film, she attended New York University, where she majored in drama and honed her acting skills on the stage, taking on such challenging roles as Desdemona in Shakespeare’s Othello. Since returning to the screen in 1983, Felissa has over 35 titles to her credit and is now considered one of horror’s iconic actresses. Above photo of Felissa exiting the “Barbie Dream Hearse” courtesy of Felissa and gAk Photography.

(Author’s Note: My correspondence with Felissa was through e-mail and text messages only, and I received no photo verifying it was actually her I was communicating with. So, even though I have no reason to doubt it was actually her replying, I can’t say with 100% certainty that it was ….but I’ll go as far as to say I’m 99% sure it was.)

CHRIS CHARLES: I promised I wouldn’t ask you too many questions about Sleepaway Camp, but of course, I’m going to ask you some, so ….you’ll probably always be best known for your role of Angela Baker in that film. Are you okay with that or do you feel you’ve should get more recognition for your other work?
FELISSA ROSE: I am thrilled with that! It’s so cool that people still recognize Sleepaway Camp after 30 years! Very proud to have been a part of the film and the horror genre.
CHRIS: For awhile, did some people who had seen the movie actually ask you if you were really a boy or a transsexual?
FELISSA: (Laughs) Luckily I haven’t really gotten that!
CHRIS: While researching to come up with some questions to ask you, I came across SleepawayCamp.wordpress.com and the tagline reads “A Recovering Sleepaway Camp Addict.” If he’s recovering, I can only imagine what he was like at the peak of his addiction. (1/4/13 Edit: I have since found out the author of that site is a female.) Do you often meet many fans who know every little detail about that film, ever better than you do?
FELISSA: Yes, my husband! It’s cool that people know what they love and really analyze it! I love that!
CHRIS: When did you first realize that you were part of what is now a cult horror classic?
FELISSA: I’d say about 13 years ago when Jeff Hayes from Sleepawaycampmovies.com got in touch with me. He helped me see what was happening online and how many people still love the movie.
CHRIS: Do you still keep in touch with anyone from that film?
FELISSA: Oh yeah, Robert (director), John Dunn (Kenny), JT (Ricky), Paul (Ronnie), Desiree, (Aunt Martha), we really were like a family!
CHRIS: I’ve heard rumors that you’ll be reprising your role as Angela once again for the final installment in the Sleepaway Camp trilogy. any truth to that?
FELISSA: We’d love to do that but so far there’s nothing planned!
CHRIS: You didn’t do many films for about 10 years after Sleepaway Camp, but you went to NYU during that time and did some stage acting. What was it like for you doing theater as opposed to film?
FELISSA: I truly enjoy theater and it’s an amazing medium for actors. The immediate gratification is incredible but there’s nothing like film! I’ll always be in love with the camera.
CHRIS: What were some of your more memorable (stage) performances?
FELISSA: Tony n Tina’s Wedding was a blast! I had the best time working the crowd in that show. We interact with the audience and that’s always hysterical.
CHRIS: Any desires to return to the stage?
FELISSA: No, not at all at this time.
CHRIS: Were you offered many movie roles during that time but turned them down?
FELISSA: No, I wasn’t really pursuing film. I was studying and married at the time so it really wasn’t on my radar.
CHRIS: Who have been your favorite people to work with, on either side of the camera?
FELISSA: I love Sean Cain, Dave Campfield, Francis Xavier, all amazing directors, and Deron Miller, Vincent Pastore, Ellen Sandweiss, Tiffany Shepis, Brinke Stevens, and Debbie Rochon are my favorite actors to work with.
CHRIS: Yes, I hope to get Brinke and Debbie for interviews sometime in the near future. So, is there anyone you’d love to work with but haven’t yet?
FELISSA: Jamie Lee Curtis and Danielle Harris are really at the top of my list.
CHRIS: You make appearances at events where you meet with fans. Ever had any problems with stalkers or strange admirers?
FELISSA: Very little but nothing too crazy. I love meeting everybody!
CHRIS: Do you have any interests or pastimes you don’t normally put on your bio?
FELISSA: I love traveling and doing anything with my kids.
CHRIS: You’ve been living in California for a long time now, but are you still a New Yorker at heart?
FELISSA: I am totally a New Yawker, but I love Cali. It’s a beautiful place and there’s so much to do outside, I love that!
CHRIS: Well thanks so much for doing this, Felissa. In closing any shout-outs to your fans …the normal ones and otherwise?

FELISSA: (Laughs) Just always a huge thank you for all the love and support! I’m very thankful!

The above 2001 USC student short film Event, is a rarity in that it features Scream Queen Debra Lamb in one the few student films she starred in during the early 2000s. During this period,

Scream Queen Sarah French recently announced her upcoming 2016, limited edition calender, that will feature 13 full nude (not just implied) photos of her. According to Sarah; “the full color calendar will be limited to

Laura Giglio has appeared in over 200 B-horror films, beginning with 1994’s Sorority Slaughter. She’s been strangled, stabbed, and drowned on screen throughout her career and has always embraced being a Scream Queen.