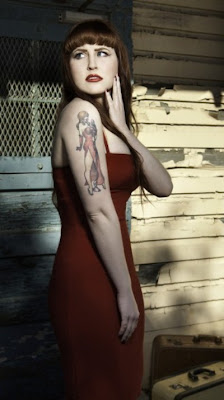 Scarlet von Harlet is best known as one half of the “Cave Girls,” who appear on the Saturday late night horror flick show Creepy KOFY Movie Time on KOFY TV, San Francisco. She and her fellow Cave Girl, Sasa Leung, are sort of the cheering section for the show’s hosts (Balrok and No Name), and much more. In addition to lending the show some eye candy and showing off her go-go moves to some great retro surf and rockabilly music (provided by house band, The Deadlies), during intermissions, Scarlet gets involved with such things as answering viewer questions, demonstration how to use Shake Weights as a distraction, and sampling unique cuisine.

After briefly meeting Scarlet last year at Miss Misery’s Nightmare to Remember film festival, I made a note to later contact her about a feature here. I did, she graciously accepted and this is it. However, I actually didn’t interview Scarlet, per se, but rather the lovely young lady behind the Scarlet persona, who willingly stepped out of character for our chat. (Sort of like Batgirl agreeing to talk to me as Barbara Gordon.) Still, out of respect for her privacy, I’m using her stage name here. Oh, and I give Scarlet very high marks for her punctuality.

CHRIS CHARLES: Thanks for taking time to do this. Of course, viewers of Channel 20’s Creepy KOFY Movie Time in San Francisco, know you as Scarlet von Harlet.
SCARLET VON HARLET: No problem, Chris. Thanks for talking with me today. 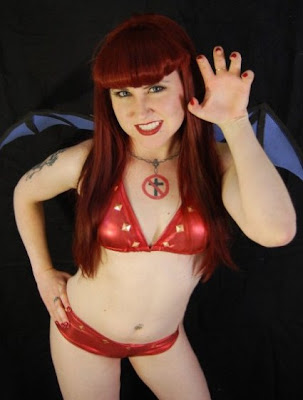 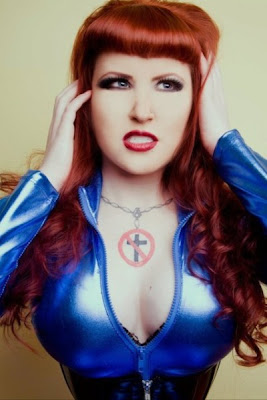 SCARLET: No, I had one photographer edit them out, but I’ve had some of them longer than when I got back into modeling so the tattoos win.
CHRIS: I know you don’t do nudity and you clearly state that at your modeling profiles but despite that, do you still get offers for nude or semi-nude shoots?
SCARLET: All the time. Mainly from people I’ve never shot with. It gets tiring.
CHRIS: What are your hobbies?
SCARLET: I like to play the guitar and sew. I had to give up my sewing machine a few years ago but I’m getting back into it.
CHRIS: Do you make any of your own outfits?
SCARLET: Sometimes, but not as often as I like. I’m hoping to change that though!
CHRIS: Are you often recognized as Scarlet when you go out as your everyday self?
SCARLET: When I’m in the Bay Area, I get recognized a lot, especially when Sasa and I go out together, but not as much down in LA.
CHRIS: Well thanks for giving me this exclusive look at the girl behind Scarlet. Any screams, plugs, or shout-outs to anyone?
SCARLET: I’d love to give a shout to all of my Creepy KOFY cast and crew as well as all the fans! I can’t begin to tell you how much you all mean to me! Thanks again, Chris! (Scarlet off mic: Phew! I always get nervous in interviews.) 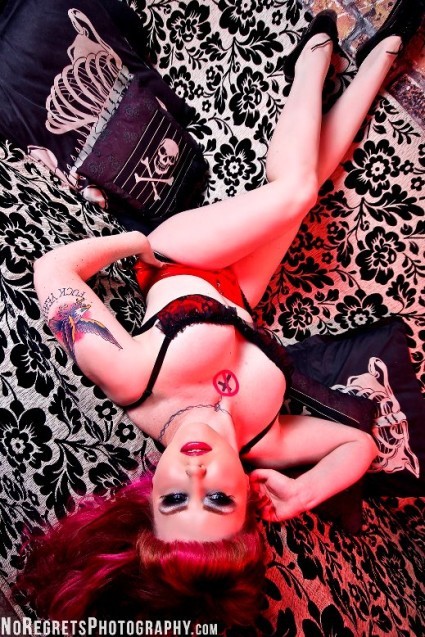 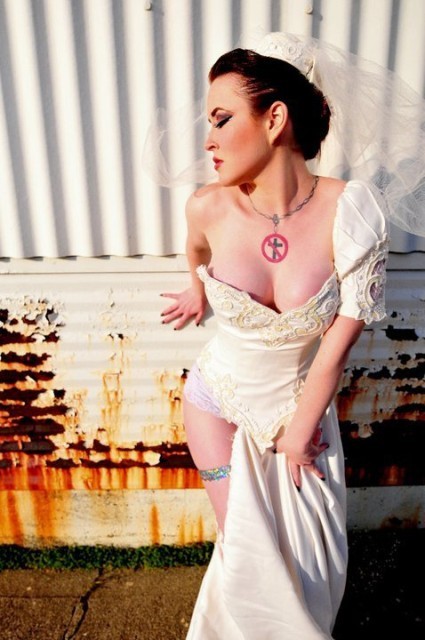 Photo by Mel Jones for PinupLifestyle.com 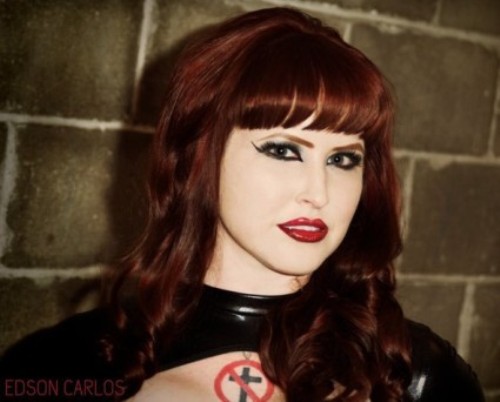 Photo by Edson Carlos for MyFavoritePinups.com

Creepy Kofy Movie Time segment “60 Seconds of Horniness” featuring Scarlet
dancing with her fellow Cavegirl Sasa Leung, who will also be making an
appearance at this site in the very near future

See more of Scarlet at:
Her Facebook
Her Tumblr
Model Mayhem
Pinup Lifestyle

Big thanks to Reyna Young of Last Doorway Productions and the upcoming Days of Terror Sacramento Horror Convention.

The above circa 1940 video of Chinese-American burlesque queen Noel Toy performing her famous fan dance, makes it clear to see why she was was often billed as “The Chinese Sally Rand.” Undoubtedly the most

As it’s coming up on the Halloween season, here’s the Queen of Horror in the San Francisco Bay Area, Reyna Young, better know by Bay Area horror fans as Miss Misery, with a teaser for