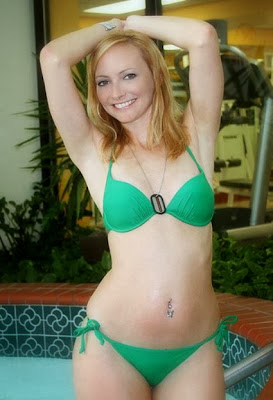 Native Texan Carly Capra was brought to my attention by my good friend Carlo Rodriguez, who’s had the pleasure of photographing Carly on several occasions. (The photo at left is from one of his shoots with her.) A trained dancer and former co-captain of the Cowtown Hotties bikini and promotions team, Carly has been modeling since she was very young and has been a promotional model for such names as Stanley tools, Miller Light, Heineken, and Bank of America. Not to mention she was also the Alien Bee Babe of the Month for April of 2012.

Carly’s still modeling but now focusing more on her acting career. One of her most noteworthy film credits to date is that of Dr. Elizabeth Craig in the 2011 indie horror film Psycho Killer Bloodbath. Her strong performance in that one, reminiscent of Camille Keaton in 1978’s I Spit On Your Grave, earned Carly the Best Actress award at the 2011 San Antonio Horrific Film Fest. Her most recent film, Billy “Bloody Bill” Pon’s gorefest Circus of the Dead, in which she plays “Cry-Baby,” is slated for release in May of next year. 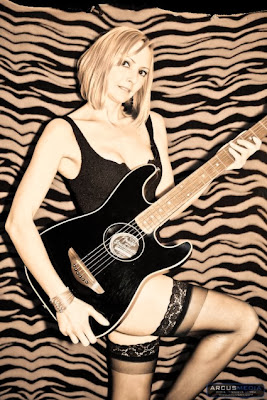 CHRIS CHARLES: Were you born and raised in Texas?
CARLY CAPRA: I was born in Madrid, Spain. My father was in the Air Force. I’ve lived in Texas since I was a year old.
CHRIS: I assume you’ve been asked before if you’re any relation to acclaimed director Frank Capra?
CARLY: No relation, unfortunately. But I did take the last name from him. I have Italian roots, so when I was looking for a stage name, I researched famous Italian names. He was an award-winning director so I thought maybe it could be good luck and it seemed to be the name people liked the most when I was throwing a few around.
CHRIS: I first noticed you from a bikini photo that was shared at Facebook by our mutual friend, Carlo Rodriguez. Since then, I’ve seen quite a few photos of you in many different bikinis. Do you have a pretty extensive collection of bikinis?
CARLY: Yes I do. I was a Cowtown Hottie for two years, which is a bikini team in Fort Worth. So I acquired quite a collection during that time.
CHRIS: Any favorites?
CARLY: My favorites are the hot pink, silver Baby Phat, and green and white. Too hard to choose just one!
CHRIS: I’ve also seen you pose with guitars. Do you play?
CARLY: I did play when I was a kid, I had a red acoustic that was small and fit me perfect. I’m a little rusty these days. Definitely a turn on when someone can play well.
CHRIS: I’ve also noticed you wearing a dog tag in some photos. Any significance to that?
CARLY: Yes, it’s actually a promotion for Underdogs.com, which is a website for underground movies and more, that Carlo Rodriguez started. You can buy or rent my movies Psycho Killer Bloodbath and Naked Horror, using code 6995-A2 for a discount. They also have a large selection of other movies.
CHRIS: Any favorite photographers to work with?
CARLY: Roger DeWater, Eric Dickson, Remy St.Paul, Carlo Rodriguez, Nick Jones, Kristy Hofer, and Scott Sprague.
CHRIS: Despite the fact that you clearly state you don’t do nudes, do you still get offers to do nude or semi-nude photo shoots?
CARLY: Of course (gives a big smile).
CHRIS: You’ve actually done much more modeling than acting, which you started doing within the last few years. Would you still consider yourself a model first and actress second, or have you now moved on to acting?
CARLY: I have been modeling most of my life. I made my first movie in 2009, and have really been focusing more on the acting since then. I just love being in front of the camera either way, but the acting is something I will be able to do the rest of my life.
CHRIS: You’re also a trained dancer. What dance credits do you have?
CARLY: I don’t have any dance credits, unless you count me dancing in Brand New Machine’s music video for “Girls Like You.” 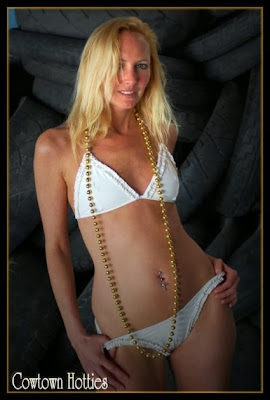 CHRIS: Well, I definitely count that. So, what was it like being a member of the Cowtown Hotties?
CARLY: It was a lot of fun and hard work. I met so many people and really developed a huge fan base. It was very hard to walk away from my team, it became my whole life, but I had to start focusing more on my acting career.
CHRIS: Were you ever a cheerleader in school?
CARLY: (Laughs) Everyone asks me that. No, just pep squad in junior high.
CHRIS: You won the Best Actress award at the 2011 San Antonio Horrific Film Fest for your role in Psycho Killer Bloodbath, which was released in 2011. You’re now working on Circus of the Dead, which is slated for release next year. Why the two-year gap between films?
CARLY: I was working on a bunch of smaller things, modeling, the bikini team, and acting. I also took some time to regroup after leaving the Cowtown Hotties. I also work a full time job and I’m a promotional model, so things get hectic at times.
CHRIS: As for your film work so far, who have been your favorite people to work with, on either side of the camera?
CARLY: Everyone I have worked with has been great, they have all contributed in some way to my success. My faves know who they are. I wouldn’t want to hurt feelings if I forgot to mention anyone.
CHRIS: Is horror your favorite genre?
CARLY: Horror and comedy.
CHRIS: Any “old school” Scream Queens you particularly admire?
CARLY: Marilyn Burns from Texas Chainsaw Massacre, I met her this year. Jaime Lee Curtis has always been a favorite too.
CHRIS: Do you have any hobbies, interests or skills you don’t mention on your bios?
CARLY: I love all types of music and try to catch local gigs when I can. Watching movies, reading, and hanging with my friends when I have down time. I learned how to shoot a bow and arrow for a role this year.
CHRIS: Well I’m happy to be adding you to my growing list of lovely interviewees, Carly. Thanks so much. In closing, any shout-outs or plugs for upcoming projects?
CARLY: I’ve had a good year! I am “Cry Baby” in Circus of the Dead by Billy Pon. I also appear in Degenerates, a post-apocalyptic movie, which is showing at the DOA Blood Bath Film Festival on October 20th. I just wrapped filming for Prey for Me by Remy St. Paul, where I’m a bow hunter. SoulCatcher by Greg Vestal is still in production, this is a paranormal based movie, I play Amy Woods. And my newest project is Nutty Buddiez by Cedric “Cnote” Buard. This is a comedy webseries that will be released on Youtube soon, I play Bitchy Betty. I’m excited for what the future holds! Thank you Chris!! Much Love!
See more of Carly at:
Her Facebook Fan Page
Her IMDb Page
Model Mayhem
Carly on Twitter 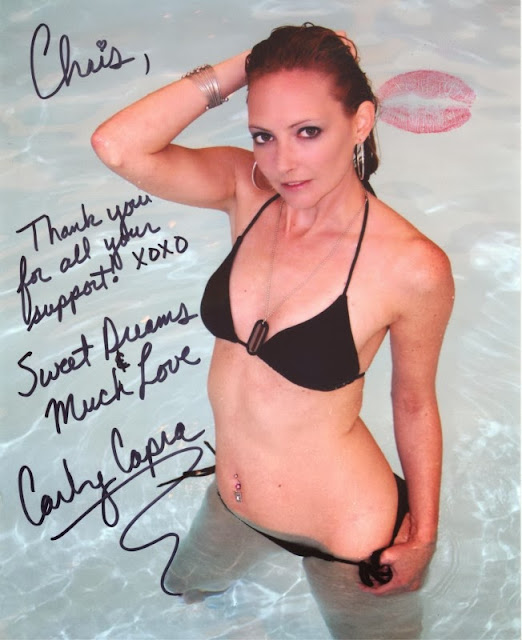