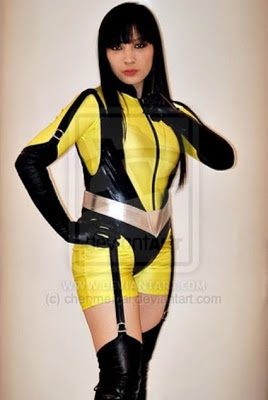 I recently became acquainted with Chai Chen (pictured at left as Silk Spectre II from the popular comic book Watchmen), who’s been into cosplay just little more than a year but in that short time, she’s become one of the most well-known cosplayers on the Philippines’ cosplay scene. Chai belongs to an online cosplay community based in the Philippines called “Filocosplay” and she often attends events and conventions where she and her fellow members interact in costume as some of the most popular comic book, anime, and game characters.

Chai was a little reluctant when I first approached her about doing an interview, citing some more popular and seasoned cosplayers I should try for instead, but after some gentle persuasion (and flattery), she obliged.

Some other lovely cosplayers from the Philippines include ….

Chai Chen was featured in my article on cosplay models of the Philippines back in March of 2010. Keeping in loose touch with Chai over the last five years (and having a hard time believing

Jessica Felice began her acting career on the stage, doing dinner theater, as well as touring to do children’s theater and summer stock. Besides acting on the stage, she also performed as an illusionist and

Popular model and cosplayer Linda Le, who’s better known by many as “Vampy,” is the most recent cover girl for FHM Singapore. Based out of San Jose, California, Linda is one of the highest-profile cosplayers