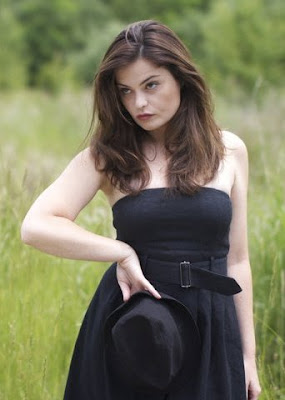 Primarily a behind-the-scenes person, illustrator and animator Keryn Thompson doesn’t consider herself a model, but when she does get in front of the camera, she’s like the type of girl who doesn’t like to go to school, but still brings home straight A’s. She pulls it off like a pro without aspiring to be one. Not one for the typical cheesecake poses, Karyn’s expressions (such as the one at left from a photo shoot at Toms River, New Jersey) make me wonder what she was thinking at the moment the photo was taken.

Even though Keryn looks like she’d be very successful in the spotlight, she’s doesn’t have to push for that because she’s been quite successful out of the spotlight. A couple of her more notable design credits include her works featured in the promo campaign for Stevie Nicks’ Crystal Visions album and on Linkin Park’s Minutes to Midnight special edition album.