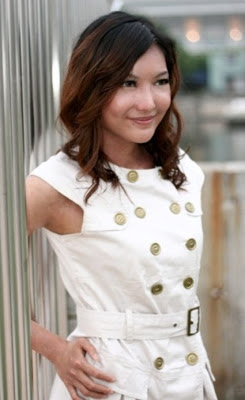 I first caught Cornelia Tang’s Xanga blog several months ago and found her to be quite intriguing. I immediately considered her for a feature, but couldn’t nail down how I’d present her. even though she isn’t a celebrity or in the entertainment industry, she appears to have sort of  a celebrity lifestyle. She isn’t a professional (or even semi-professional) model either, but she has done at least one photo shoot with a professional photographer.

Cornelia is also a popular blogger within Xanga’s seemingly self-contained community of “Xangans” and it’s clear to see why. She has a great sense of humor, so her blog entries are amusing, as well as well-written and interesting, especially the ones where she’s documented her extensive solo travels to countries outside of her native Singapore. After contacting Cornelia and learning she was open to being featured, I suggested an interview format would be the best way to present her here, which she readily agreed to.
Chris Charles: So, were you born and raised in Singapore?
Cornelia Tang: Yes, I was
CC: What exactly is your occupation now?
CT: I’m still in college.
CC: What’s your major?
CT: Journalism actually, planning to major in political science when I go to a university.
CC: I’ve read your blog for almost a year now and I know you’ve done quite a bit of traveling during that time.
CT: Haha! Yeah too much actually. I need a vacation from vacations.
CC: How many countries have you visited?
CT: 27 I believe but I actually lost count the last time I tried to count them all.
CC: Most of them in Europe?
CT: I guess, I’ve been to every continent except Antarctica.
CC: Have you traveled to all these places alone?
CT: Yeah, I like it that way. Since I’m really impromptu and hate making plans, I’m better off alone. Plus, I prefer being left alone in my own thoughts and to see things thought my own perspective. But of course, I do meet many wonderful people along the way.
CC: Being an attractive young girl traveling alone, have you ever had any bad experiences?
CT: Plenty, especially in Italy, where I got men stalking me in broad daylight and some went overboard by coming up to me and hugging me!
CC: (Laughs) Well, I guess that’s just their custom, perhaps?
CT: I guess so! (laughs) And I found another use for my Versace handbag: To smack those pigs with.
CC: Ah, I see. Well, ’nuff said about that. So, besides going to school and traveling, what else do you do to occupy your time?
CT: I do inline skating, fencing and kickboxing. I’m a laid-back person, so if I could, I would just stay home the entire week and do nothing.
CC: Do you do kickboxing and fencing just for the workout, or have you ever had any matches?
CT: Haha! Just for the workout. I’m not a competitive person. Also, I just want to kill time here in Singapore until I move to the States.
CC: Have you ever done any sort of modeling or anything related to show biz such as singing, dancing, TV, etc?
CT: Photo shoots now and then. I did get quite a few offers to appear in magazines and contract for TV shows. Like I said, I’m not competitive, let alone attention seeking, and I think it’s a waste of my intelligence, therefore I don’t see myself in the media. I’ll let the other girls shine instead.
CC: So, what do you plan to do when you move to the US?
CT: I want to finish my degree over there.
CC: Being a spontaneous person, what would say has been the most adventuresome thing you’ve ever done?
CT: Well, like my best friend said, “I live and die 20 times a day.” Perhaps the most unbelievable thing I ever did was leaving my own security bubble and the life I’m used to and volunteering in Kenya. Nobody believed that I could last for more than a week there without the comfort I’m used to. But after that one month of living in horrible conditions, getting robbed in Nairobi, and a really bad case of food poisoning, I was surprised that I was even alive.
CC: Wow, what exactly were you doing and what were your living conditions like there?
CT: I was helping to build schools and a water purification system with a team of humanitarian workers. The living conditions were really basic. I won’t say that it’s bad, but just really basic.
CC: Lastly, I know I’ve asked you this before, but for readers who feel an interview with a pretty girl isn’t complete without this info; what are your vital stats and age?
CT: 33-26-33, I’m 5′ 6″ tall and forever 21!
CC: Fair enough. Thanks, Cornelia. It’s been a pleasure.
CT: Sure, same here! 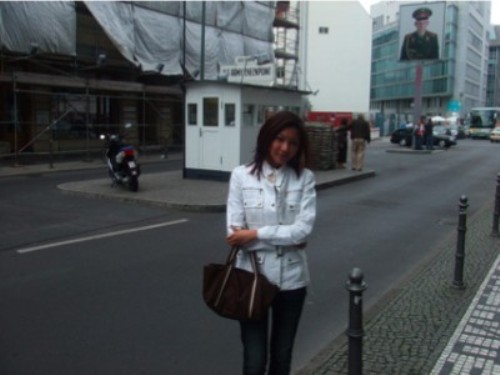 Berlin, in the Soviet Sector at Checkpoint Charlie 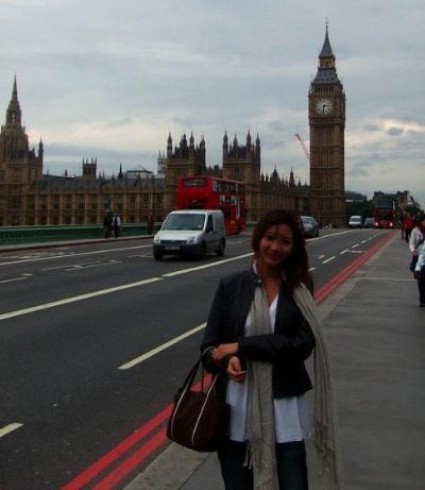 In London. Westminster Abbey’s in the background 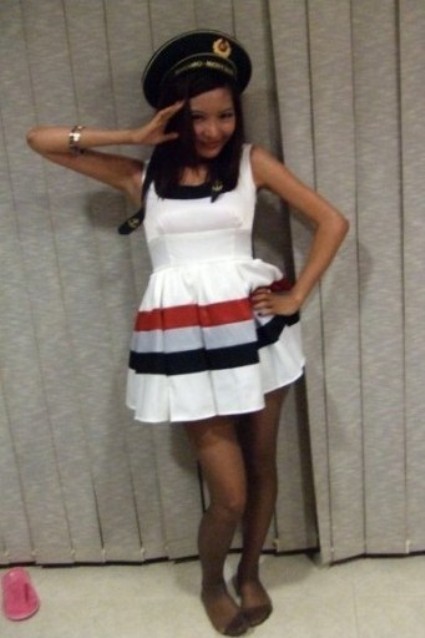