Editor’s Note: This phone interview between Gino Terrell and Alura Jenson was originally written as an article for the now-defunct online platform “MCXV” in July 2017. It has been republished at Idol Features courtesy of Gino Terrell.

After taking a trip down memory lane, one actress that comes to mind is Alura Jenson.

During our 2017 interview the then 40-year-old mentioned she had no plans for leaving the adult entertainment industry any time soon. Nearly three years later and the household name is still going strong creating new content for her fans. She’s still a popular attraction amongst her fans and appears to be getting better with age.

Shortly after the original story had come out in 2017, Jenson sent me a text regarding the article.

“Unbelievable. Simply exquisite. You made my entire day. Thank you, for exceptional work,” Jenson had texted me then.

Without further ado, here’s our 2017  interview.

Jenson laid in bed sore while speaking on the phone for an interview the morning after The Fourth of July in 2017. Her soreness was at the expense of her second week recovering from surgery. A surgery for breast implants that would turn her 34H cup size to a 38JJ. Even during the recovery process she stayed busy, which is a must  for a star in her position. Jenson is amongst the first percentile in the adult entertainment industry. And if you think that means she’s well off without putting in the work, think again.

Actors only get paid once for the film shoot with a percentage of that money going to agents and taxes, Jenson said. The ones who bank more money off their films are the ones who are marketing themselves through a website or merchandising. This is why Jenson works around the clock daily, for atleast 10-15 hours. But she’s used to it.

“I worked everyday since I was 14,” Jenson said.

Always a hustler, Jenson didn’t become a pornographic actress until 2011 at the age of 33. Beforehand, she was a dancer and even before that, she was enlisted in the military. Through every stage of life she carries three traits with her. Traits she believes describe her best. Being honest, fierce and relentless.

“I’m honest to the core even when it hurts,” she said.

As a teenager, Jenson went on to (Navy) boot camp.

“I loved every second of it.” and “Not being told what to do was the best part,” Jenson said. Months after boot camp, she concluded she had a sex addiction.

“Every day it was somebody,” she said. “I went buck wild…had my first gang bang a month after boot camp.”

She would later transfer out of the Navy, when messin’ around with too many partners started becoming a problem, to the Air Force. Little did she know, the Air Force was even worse.

“People in the Air Force are freaks. They’re swingers…cheat like crazy,” she said.

After getting an honorable discharge from the service, she decided to become a dancer in Las Vegas.

After dancing for clients and then some, along with picking up a drinking habit to function as a dancer, she realized it was not the safest practice for her. She thought to herself: “Oh, God. I could actually die doing this.”

“They thought it was awesome. They’d help me get shoes and wardrobe [for shoots],” Jenson said. “I didn’t want my kids growing up being ashamed of themselves, not thinking everything they did was a sin…me being honest with it is a large part of why they haven’t had a problem with it.”

“I don’t bring my work home,” like other stars have, Jenson said.

Honesty is a big part of Jenson’s personality for the woman who says “I’m honest even when it hurts.”

While loving the work of being an adult actress, she faced her share of disapproval within the community. Something she doesn’t quite comprehend, especially when she considers her own mentality in that equation.

“I don’t give anyone shit, so I shouldn’t get shit from anyone,” Jenson said. But “I get the stares.”

The only problem she has with her line of work is trying to balance working and being a mother.

“It’s been a living hell. If one requires more attention, the other one loses,”she said. “My number one priority is not my job, it’s my family. If I could do something else for the same amount I would.”

The community disapproval and time commitment aren’t the only challenges Jenson has faced as an adult actress. Making it in the industry was a challenge given her plus size build and height at 5-foot-8-inches as most women in the industry are 4-foot-9-inches to five feet tall, Jenson says.

Discriminating against race and gender orientation in the industry is a challenge Jenson has witnessed firsthand.

“The very first scene I did I learned of the bullshit,” Jenson said, referencing the flak she has received for performing with Lucas Stone, an African American performer.

Jenson has advocated for both party’s as she’s worked on interracial projects and worked with other woman, transgender performers and men who are bi-sexual.

Being fierce and “fighting to the nail” for what she believed in has been key. Plus, being comfortable with herself has all helped her survive and thrive in the adult industry.

You have to “know your worth in spite of what someone says. I’ve had enough people telling me you’re too fat, you work with gay men, women, trans…but I’m the one getting the paycheck,” Jenson said. “I love trans women, bi-sexual men…I done it all because I love it and it makes me happy.”

At age 40, Jenson had no plans to retire as an adult actress.

“I can give two fucks with what the industry says,” Jenson said.

With her 43rd birthday approaching next month, May 31, Jenson is still going strong.

Shooting her first scene with Lucas Stone, a film that wasn’t released until three years later, Jenson admits she was nervous.

“I was terrified. Not because of what I was doing, I was afraid I was going to look stupid,” Jenson laughed. “The sex during the scene was extremely painful.” This was due to Stone being significantly larger in an area that Jenson never experienced in her life until that point. The three-year release delay was worth the wait for Jenson’s fans.

While no two-days are ever the same in her line of work, she does have her favorites to work with. They are the ones she finds charming and, on a rare case, those who may be bigger than the plus size actress herself.

“If I was single,” Jenson laughed. “He was electric from when I first met him on set till the time I wiped his giz off my face.”

“He was so easy to be around,” Jenson said.

While Jenson has had her share of fun on set and with different actors, one experience she does not like is doing live camera shows as she despises being told what to do.

“It made me angry, it brought out the East Coast in me,” Jenson said.

Whether it was a guy bringing his girlfriend on set, a “no-no” in the industry, or one male star going off and breaking Julie Cash’s nose, Jenson has her share of wild memories having been in the industry since 2011. 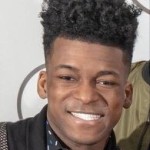 Released: Still unreleased (and may never be) Model: Amelia Naomi

Sean Donohue’s indie slasher, Die Die Delta Pi, was probably shot a couple of years earlier than its year of release, judging by the looks of a couple of the actresses in the film. It’s not bad for a film of its type with a modest budget, but that’s mainly because of its female cast.