Here’s an obscure one. THE WAR IN SPACE was Toho’s STAR WARS cash-in, although the plot is sorta similar to the 60’s film ATRAGON. Basically, the Martians start blowing up stuff and we’re largely defenseless. One man has a blueprint for a super-duper space battleship/submarine, though, and he’s recruited to build his machine and attack the invaders’ home planet. Pop singer Yuko Asano puts in the most memorable bit when she’s captured by the enemy and forced to wear a little black leather bathing suit. Somewhat counter-productively, she’s shown almost exclusively in long shot when wearing this costume, even though it was shown heavily in advertising materials. 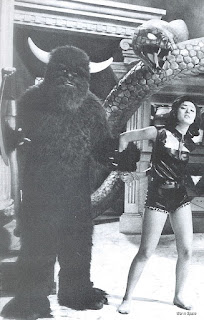 Though entertaining, THE WAR IN SPACE isn’t Toho’s most exciting epic. In fact, even after a couple of viewings, I find I don’t have many lasting memories of it. Still, I’m grateful to find the film was released on a nice disk from Tokyo Shock. If this one saw any screen action in the States I can’t be sure, but there was a dub track for this Japanese adventure (actually, any Japanese film it was felt might play well in the States usually had a dub track commissioned by a Chinese outfit. These International dubs were pretty lousy, and most imports were re-dubbed by the pros at Titra Sound Studios. By the mid 70’s, however, these Japanese films were being handled by much smaller distributors who stuck with the International dubs because it was cheaper. This film boasts only an International dub, so it’s possible it played the States, although I can’t confirm the fact).

The Beast and the Vixens was apparently a skin-flick cash-in on the Bigfoot craze, though the sex and nudity practically vanish in the second half.

From back in 2011, very early in my career as a professional cartoonist. My anatomy wasn’t very strong this early, so I had to focus more on the jokes.

The modern day Jungle Girl Tara gets diminished by a giant spider in the episode, “Jungle Triangle” from Femforce 156. Inks by Jeff Austin.