May 23, 2017 Author’s Addendum: It is with a heavy heart I write this, as I learned today of Deborah’s passing, just one year after I had the pleasure of interacting with her for this interview. Deborah was one of the few ladies I stayed in close touch with after her interview published and it honored me that she considered this to be one of her best interviews ever. Even though I can’t say I was one of her close personal friends, Deborah, with her optimism, love for life, and knowledge about what she believed in, was someone I could even turn to for help, and she was happy to give it when I did. May she rest in peace and I’m sure that someday soon, Deborah’s spirit will oversee the completion of Touch My Heart. 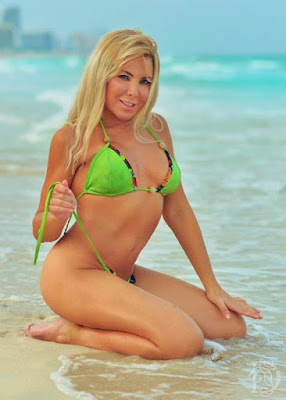 Actress and model Deborah Funes began her career performing in elementary school plays in her native Argentina, where she acted to an audience of teachers, parents, and nuns. As an adult, she  began modeling professionally at 18 and went on to appear in television commercials and popular shows on Latin TV before moving to the US. Now calling Miami home, Deborah has appeared in several independent films, alongside some big names in the industry, while making quite a name for herself. Her growing list of credits include a lead role in Jim DeVault’s Jebadiah’s Axe, as well as prominent roles in Joe Hollow’s Disciples and Lawrence W. Nelson’s You Found Me.

Probably the most noteworthy of Deborah’s accomplishments, wasn’t before the camera. Two years ago, doctors found a cancerous tumor in her breast. Despite recommendations from her doctors to undergo conventional treatments, which involved chemotherapy, Deborah recovered using natural remedies. After a long road and dedication to her course of action, in March of this year, she is almost cancer free and the tumor is almost completely gone. She’s currently working on a film based on her experiences and her healing process entitled Touch My Heart. Read on to learn more on this and other topics covered in Deborah’s exclusive interview with Idol Features. Above photo by Dmitry Chernomazov.

DEBORAH: (Laughs) No. The strangest thing that happened to me while shooting was to run through the woods at midnight. It was definitely scary and dangerous because there were all types of weird animals from the Texas area: Scorpions, snakes, wolves, etc. I got a lot of bites from insects and I had the obligation to fall on the floor between spider webs. It was really one of the most disgusting experiences of my life. Now I know that I was risking my life and I won’t do it again.

Debbie D will very soon begin her fourth decade as one of the top Scream Queens in indie horror. Those already familiar with Debbie’s works, know that when it comes to getting bloody, bare, and bound, she has few equals.

When I said to my colleague, Geo Brawn, that it looked like Patty Mullen was going to be hard to nail down for an interview, but would be well worth the efforts, he replied; “Oh definitely. I mean, c’mon, she was Frankenhooker!”

I remember seeing the movie Showgirls on the big screen in 1996 shortly before I went in the Army. As my friend and I left the theater after the film let out, I said that I wished Rena Riffel would have had more camera time.