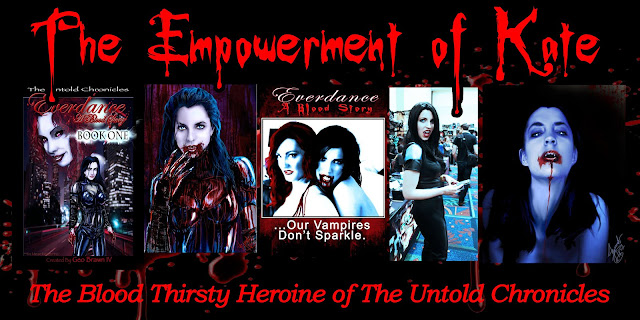 The Character of Kate Bennet was the main protagonist of my first book Everdance: A Blood Story. The creation of such a character came from the simple concept of a character who doesn’t know her true strengths, and its not until she’s driven to really fend for herself, that she learns who she really is.

I wanted something different in all my stories. That was the whole idea since I first began, really. I wanted characters that were not cliché, but instead always had a twist. With Kate, I wanted an immortal vampire who had never learned how to be anything but a mortal. And over the course of her first thirty years as a vampire, she was kept as human by her husband/maker Andre. That’s the set up for who she is. She’s a homemaker, she’s a children’s book writer, and she has this whole dark side she’s never explored. Andre is a killer, and she only drinks from him, so the idea of killing never comes into play from the moment she is sired into that immortal world. And then comes the twist. What would Kate do if Andre never returns home from feeding? How will she survive on her own? This woman-child now has a choice; Kill or die.

The concept was not unlike I’d seen in many situations in my own life, there are those moments where you can either sink or swim. It was from this story that I developed one of my greatest antagonists, Lilith. What if I made Kate so bad (at first) at killing (once she’s made up her mind to do so), that Lilith comes in to show her how to be proper about it? But it’s within that spirit being reborn that Lilith really ends up showing Kate that the power of who she kills is within her judgment, and it’ll take her own ability to make her dark side really shine in the heat of night’s embrace. She must teach herself in the end who is the prey and how to kill them, and it’s that empowerment that really drove me to create a full graphic novel on her character.

To tell Kate’s story is to tell the story of anyone whose stood up to their own fears and still managed to come out on top, and with that, learn just how strong that spirit can be, even in the face of its own beastly qualities. Kate is a hunter of killers and rapists and molesters of the innocent. In that process she learns to make piece with what she has ignored to not just survive, but live with her carnal need. She goes from the meek British beauty with a child’s heart and learns that there is also a dark sexual vixen who also needs to have her say. That journey of becoming that dark avenger of the innocent is really only the beginning for her. As she refuses to give up her “other side,” she remains the childrens’ writer, and has that other persona.

I like my characters to live as I call them, “Double-Lifers,” and have this duel side to themselves. I think it plays out well in telling a good story, and with the added sexy horror factor, has become my mainstay in creating interesting stories that challenge both male and female readers. I was once given one of the best responses to this particular story. Upon reading it, a fellow artist and creator looks at me and tells me; “I forgot this book was written by a guy. I really felt the female characters tell their story in this book.” It still maybe one of my very favorite moments as a storyteller, because of that. When you cross that line and the readers lose themselves in the story to that level. I love it. And with Everdance, and this raven haired femme fatale, I think my readers get to do just that.

Born in the City of Angels (and Demons), California in 1975, Geo discovered his need for creative output. Graduating with a scholarship in illustration, he attended the Pasadena Art Center of Design, even further developing his style in the craft. Then following, he began developing ways on just how to bring his ideas and stories into a particular medium. Ways to bring his creations to life. Now, Geo has collected a series of those stories in comic book form. With his passion for horror and fantasy, the stories he can and will tell, are unbound as indie comic books and graphic novels done his way. In additions to his writings here, check out his website BrawnGraphix.com and his podcast show, Geo After Dark. If you like sexy horror, you're gonna love what he does!