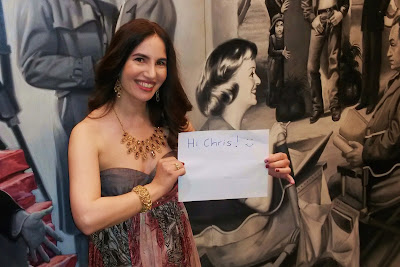 As one of the top entertainment journalists in Hollywood, as well as an actress herself, Vida Ghaffari feels equally comfortable on either side of interview mic. She’s covered film premieres, red carpet events, and shows all around Hollywood, interviewing everyone from small business owners to A-list celebs, including some Iranian personalities in Farsi, which is her mother tongue. She’s also covered quite a few eminent fashion shows of top Hollywood designers, often while wearing their creations.

Although she enjoys hosting and conduction interviews, Vida is currently focused more toward her acting career. Her credits on the small screen include Green Manor, It Casting, and The Mindy Project, in which she appeared in the pilot episode. Filmwise, some of the titles on her list are the short Cross My Heart, Grunder Oakley Productions’ Natural Born Filmmakers, and Mark Savage’s highly anticipated Circus of Dread, which has been causing a buzz around the indie horror community, preceding its release. Vida’s been the voice behind many commercials and animated films, as well. Notably, the 2014 comedy short Lovesick Fool – Love in the Age of Like, in which she worked with Dominic Polcino, one of the top animation directors in the business.

It’s no surprise Vida’s become a prominent name the Los Angeles entertainment community and has been recognized for her endeavors. This past June, she was honored with an award from the West Los Angeles Chamber of Commerce for her outstanding work. More recently, she was the recipient of an entrepreneur award from The World Networks, and of course, she granted Idol Features the following interview. Above photo courtesy of Vida herself.

Vida Ghaffari at the 2015 Action on Film Festival

Me interviewing actress and my fellow entertainment journalist, Vida Ghaffari, for More Horror magazine at the premiere of Natural Born Filmmakers at the 2015 Action on Film Festival last September. About the author Dawna Lee

My hour-long interview with Dawna Lee Heising didn’t seem like an hour at all, since we had a lot to talk about and she was such a pleasure to talk with. She’s done nearly all on a film set, on both sides of the camera.

Donna Hamblin is the star of legendary filmmaker Ted V. Mikels’ upcoming film Ten Violent Women: Part Two. (I play Joanna, who is one of the ten violent women.) Here is my interview with Donna