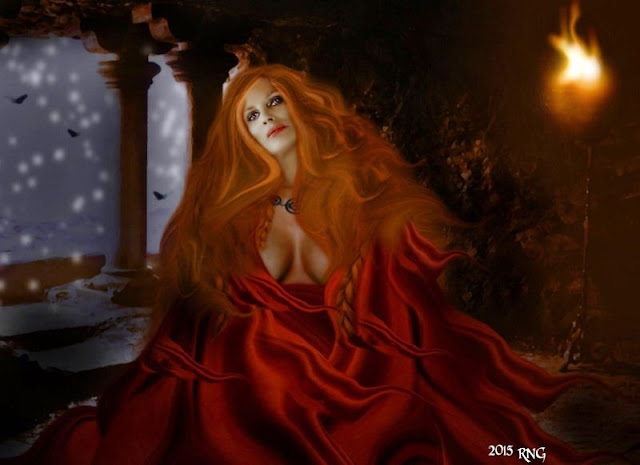 It’s been over three years since actress, model, and (no kidding) Reddi-wip heiress Liane Langford has appeared on these pages. Since my last interview with her in October of 2012, Liane signed with a top San Francisco modeling agency and has done shoots with several notable photographers. She was a Vampirette for Pat Johnson’s Malevolent Magazine shoot, posed with pink flamingos for Mark Pernal in Florida, was a girl with a gun in black lingerie for Lance Miller, and the flaming red muse for Robert Gifford’s above photo illustration.

Liane’s film appearances since her last interview here are even more notable. They include Joe Hollow’s A Blood Story, which was released earlier this year, and her role as “Brenda the Badass Bartender” in Steve Oakley’s Natural Born Filmmakers, which premiered at the Action On Film International Film Festival in September. Among her upcoming films are Ted V. Mikels’ 10 Violent Women: Part Two, Cameron J. Scott’s The Krokodil Chronicles, and Lawrence W. Nelson’s You Found Me, that has a cast chock full of some of the best-known and talented ladies on the indie film scene today.To find out details on all the aforementioned, as well as much more, including her feelings for Roxy Music’s Bryan Ferry and what she has to say to Edward Cullen of Twilight, just press play to have a listen to my latest interview with Miss Langford. 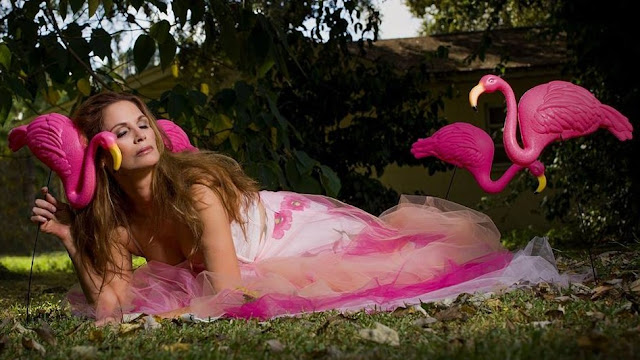 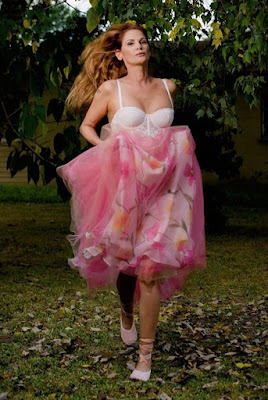 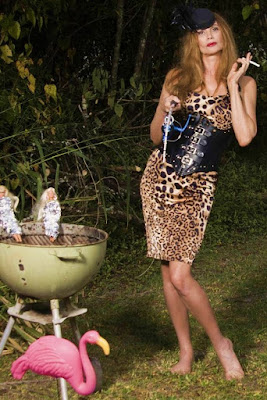 From her shoot last year in Florida with Mark Pernal. (Get it? Barbies on the barbie) 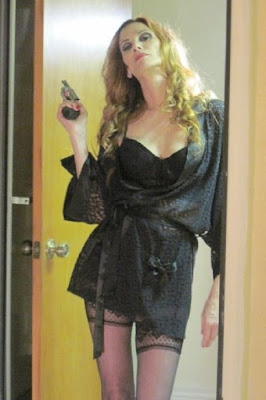 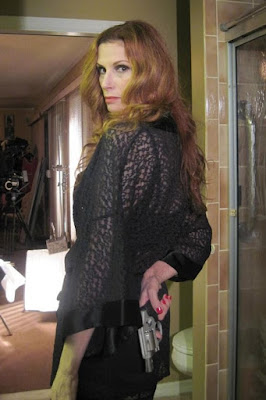 Girl with a gun: Last year, on the set of Joe Hollow’s A Blood Story.
Photo by Liane’s castmate, Scream Queen Debra Lamb. 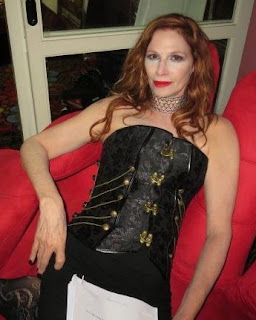 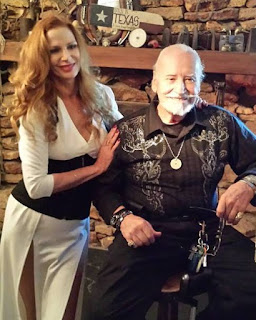 Left: Out of her “Brenda the Badass Bartender” character on the set of Natural Born
Filmmakers. Right: With director Ted V. Mikels on the set of 10 Violent Women
Signed photos available from Liane Langford
The below photos from the “Vampirette” shoot with Pat Johnson and “Black Lingerie” shoot with Lance Miller, are available in 8×10 size, personally signed from Liane to the requester. For details, email Miss Langford at screenkiss007@hotmail.com

Liane’s 2014 book, My Life as Julia Roberts: Snapshots of a Life can be purchased through Amazon unsigned or, due to the many requests she’s received, personally signed copies can also be obtained directly from Liane. The book has received numerous five-star reviews at Amazon (including one by yours truly) and includes the most popular entries that were at her now-closed blog; “A Walk in the Dark.”

As this article goes to press, Thanksgiving is only two days away, and worthy of a mention is Liane’s account of her memorable Thanksgiving family fiasco entitled “Over the River and Into Hell We Go.” Another hilarious holiday tale is “It Only Comes Once a Year, in which Liane recalls a Halloween from her childhood and a ghost costume reminiscent of what Charlie Brown wore when he went out trick-or-treating. For a personally signed copy, fans can contact Liane directly at screenkiss007@hotmail.com.

Currently in Los Angeles, where she’s been working on her new screenplay, actress and writer Andreea Boyer gave me an update (taking advantage of us being in the same time zone) on her activities since

July 16, 2020 Author’s Addendum: Liane Langford passed away July 14, 2020. She will always be remembered by family, friends, and I’m sure by fans who had the pleasure of getting to know her, as