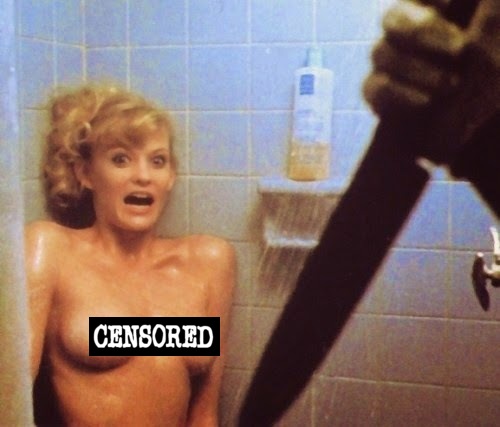 Few former Playboy Playmates have gone on to have acting careers successful enough to land them starring roles in theatrical release movies. Perhaps it’s because being a Playmate has sort of a stigma attached that the girls would have to shake before even being considered for a prominent role in a major film. However, being a former Playmate does have its advantages when it comes to being cast in B-Movies and for titillation scenes in larger-budget features.

An excellent case in point is the opening scene of Brian DePalma’s 1981 thriller, Blow Out, with Miss April 1979 Missy Cleveland (credited in the film as Amanda Cleveland) as a girl with a terrible scream getting killed in a shower scene in a slasher movie within a slasher movie. Missy herself tragically died August 14, 2001 at the age of 41 from an adverse reaction to prescription medication. Read on to see the aforementioned scene and some other former Playmates being murdered on celluloid.

Since Missy is no longer with us, she can’t say whether or not this god-awful scream was actually her or it was dubbed. If it actually was her, it’s a safe bet that she was intentionally trying to sound like the most pathetic screamer in the history of B-horror flicks, as that was her character’s talked-about flaw. For those of you who have a morbid curiosity about such things, check out Missy’s page at FindaGrave.com.

Miss December 1980 and the 1981 Playmate of the Year, Terri Welles’ character, Lisa Convey, meets with an unusual demise shortly after the opening credits rolled in the 1981 film Looker. In 1997, Terri launched her own website, billing herself as a former Playmate and the 1981 Playmate of the Year. Playboy, Inc. sued her for trademark infringement, claiming only they had the right to use those terms for commercial purposes. A court ruled in Miss Welles’ favor, stating that the use of those terms by her was nominative. Thanks to OpenJurist.org, details of the suit and settlement can be read here and thanks to the Internet Archive Wayback Machine, what’s left of Terri’s website, which was shut down in October of 2006, can be seen here. After her last post, informing her fans and website members of her site’s shutdown, she’s remained out of the spotlight ….and it’s a good bet that, unless bygones are bygones, she won’t ever be seen doing any Playboy promotional shows or events.

Miss November 1980 Jeana Tomasino (who was usually credited in her films as “Jeana Tomisina,” for whatever reason) had an acting career that spanned from the late-70s to the mid-80s and consisted mainly of B-movies and a few non-speaking parts on TV shows. In the above scene from the 1983 thriller 10 to Midnight (which starred Charles Bronson, Andrew Stevens, and Lisa Eilbacher), Jeana’s character, Karen, becomes the second victim of psycho killer Warren Stacy (Gene Davis). The first being Karen’s roommate. Many may also recognize Jeana as one of the girls from ZZ Top’s music videos “Legs,” “Sharp Dressed Man,” “Gimme All Your Loving,” and “Sleeping Bag.” Jeana retired from acting in 1985 to raise a family but reappeared in 2006 as Jeana Keough in the reality show The Real Housewives of Orange County. She’s alive and well as of this writing, reportedly making her living as a realtor in Southern California and she still may be occasionally seen making promotional appearances for Playboy.

Miss June 1980 Ola Ray was the other Playmate whose character died at the hands of the psychotic Warren Stacy in 10 to Midnight. Ola made several notable film and TV appearances during the 80s, such as in Night Shift, 48 Hours, and the sitcom Cheers, alongside a few of her fellow Playmates. However, she’ll probably be best remembered as Michael Jackson’s girlfriend in his 1983 Thriller music video. For years, she claimed she didn’t receive royalties she was entitled to from the video and eventually sued Michael Jackson just several weeks before he died in 2009. In 2012, Jackson’s estate settled the lawsuit for a reported 75 grand, 20 of which went to her lawyer. Ola retired from acting after 1987’s Beverly Hills Cop II, but hasn’t quite dropped off the radar, mainly due to her lawsuit against Jackson. After a long hiatus without any film credits, she did a voice-only role in the 2015 short film Toy Soldier.

In a rare Playmate-killing-Playmate scene, here’s Miss October 1985 Cynthia Brimhall (the first Playmate featured in the magazine’s “non-stapled” debut), shooting Miss June 1985 Devin DeVasquez in the 1990 action film Guns. In addition to this film, Cynthia appeared in other late 80’s T&A action classics that require at least two former Playmates to make happen; Hard Ticket to Hawaii and Picasso Trigger. She did a stint as a “Barker’s Beauty” on the TV game show The Price is Right in the mid 90s and has remained out of the spotlight after that ended, save for one acting credit in 2003. According to her page at the Price is Right Wiki (and until some evidence of this is seen, yours truly takes this with a big grain of salt), Cynthia, at 51, “currently resides in Dallas, Texas, where she works at a local gentleman’s club as an exotic dancer.” As for Devin, she continued to do films throughout the 90s and seemed to go into semi-retirement from acting after 2001, but not drop off the radar. Her official website is updated fairly often and she has a role in the upcoming TV movie Isle of Legends.

Miss October 1993 and the 1994 Playmate of the Year, Jenny McCarthy has had one of the most successful post-Playmate careers. In 2000’s Scream 3, which would have been the final installment in what should have remained a trilogy, Jenny’s character, Sarah Darling, fell victim to Ghostface’s knife. Unlike most other slasher films, where the killer is the same individual throughout the series, several killers in the Scream franchise, which should have been left a trilogy, have donned the Ghostface persona. Read on for more on Jenny.

Although a parody, Jenny’s “death scene” alongside fellow Playmate Pam Anderson (Miss February 1990), in 2003’s Scary Movie 3 can’t be overlooked here. This scene is an absolute classic, not just because it features the two former Playmates who have arguably had the most successful post-Playboy careers, but because the ladies with their spoof of two buxom blonde teenage airheads (Jenny was 30 and Pam, just shy of 36 when this scene was shot), simply knock this one out of the park.

The first time “Library Girl” Kendra Sunderland appeared on Naked News, was in March 2015 for an interview on the show’s “Schmooze” segment, to which Kendra received rave viewer reviews, hence the reason she was

It’s that day again and here we have Camp Crystal Lake visitor Chelsea, played by Willa Ford, getting skewered from above and providing viewers with a brief posthumous breast flash, in the 2009 remake of

Even though the amply-endowed Chloe is dubbed as a breast guest anchor in Naked News’ video archives, the above video from a few years ago (her one and only for the program) is actually an