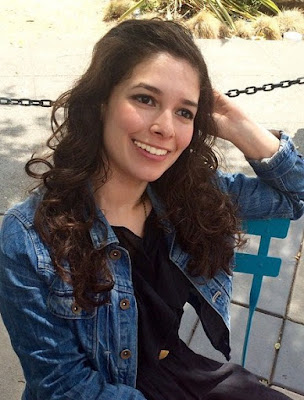 Born and raised in San Francisco, actress Natalie Stephany began her acting career on the stage in such plays as Footloose, Beauty and the Beast, and Gypsy, where she had her first speaking role as Baby June. Moving to TV and films enabled her to get her SAG card in 2006 and she’s been busy ever since. One of her most recent roles is as the stand-in for Kate Micucci (Garfunkle & Oats, The Big Bang Theory) in the 2016-slated Unleashed.

Looking somewhat ethnically ambiguous and younger than her almost-25 years, allows for Natalie to fill a wide range of roles. Having nice hands has landed her some hand modeling commercial gigs. Knowing how to drive a stick shift led to her picking up a stunt driving credit in a 2010 episode of America’s Most Wanted. It was a piece of driving she pulled off skillfully, despite making her feel like she was “about to shit her pants.” Natalie tells me she plans on attending stunt driving school in the near future to add that to a regular pert of her repertoire. Read on to see the other topics we covered in this recent interview. Photo at left courtesy of Natalie, herself.

CHRIS CHARLES: It’s a pleasure to finally get a chance to talk to you, Natalie. So, were you born and raised in the Bay Area?
NATALIE STEPHANY: Yes, I was actually born on Potrero Hill in San Francisco. I’m very, very native.
CHRIS: You recently, returned to San Francisco from Minnesota, where you flew to after a stay in Hawaii. Was that a business or pleasure trip or both?
NATALIE: One of them was a pleasure trip, the other one was for business. Lately, I’ve been getting a few jobs in the Midwest because they don’t have any SAG people. I did a commercial in Oklahoma City not too long ago. It’s pretty good money and it’s good to be working union commercials and features and making sure that things are still staying within the union parameters and there’s still jobs, but unfortunately there’s not that many people who are union who want to stay out in the Midwest.
CHRIS: How recently did you get your SAG card?
NATALIE: Mmm, I’ve had mine since 200…6. That’s actually how I met Jackie (Dallas) She’d always seen me on union things and asked me how she could get in the union and one of the people I was supposed to cast to be in a scene for a recent movie that I was in, it was actually an Italian feature film ….he told me at the last minute he couldn’t do it, so I call Jackie and I was like “Do you wanna get your SAG card? This is your way in!” So, she was very excited to get in the union.
CHRIS: Did you start off acting on stage?
NATALIE: Um, yes! Musicals were my first love. I’d been doing that for a while. I did Footloose, Beauty and the Beast. Being part of the union let’s you join the other unions for, basically free. So the theater guild …. AEA, and any other guild you wanna join, they’re all sister unions. So, it was easy to get work and I’m a soprano, so I went to the Royal Academy of London for a semester and I’ve been singing since I was young. I just took the initiative to be in every kind of singing and acting class there was.
CHRIS: What was your very first speaking role?
NATALIE: Um ….on stage it was Gypsy, actually. That was a musical that was running and I was “Baby June.” So, that was my first speaking role. On TV and film ….the only reason I got my SAG card was because I had like a couple lines on a show and they have a certain rule that if you have a line that isn’t just like “hi” or “how are you,” that you have to join the union immediately. So, I basically worked for free that week because the dues were like four grand and what I made was like barely enough for that, but I was blessed to have gotten in so easily, and I’ve more or less retained the same “look.” I’m 5′ tall, I’m 100 pounds and I look basically the same. I’m still playing high schoolers, I’ve played a middle schooler, I did the photo double for Aries Stark for King’s Throne. So, being little and being young-looking apparently has been paying the bills lately.
CHRIS: I see you’re listed at IMDb as “Natalie Stephany Aguilar.” Are you planning on, or have you already dropped “Aguilar” from your professional name?
NATALIE: I don’t use that last name very much because it’s my biological father’s last name and I’ve never met the man, I don’t know who he is, he’s not part of my life, so I don’t feel like any of my work should be a part of that, or that he should be a part of that. But with SAG, it’s sort of hard to change your name and if something’s already taken, you just have to work around it and it depends on how they want to credit you.
CHRIS: Ah, yes I did notice a couple of other Natalie Stephanys when I was doing research on you. So, We have a mutual friend, whom you’ve already mentioned; Jackie Dallas. You said you met her on a project you were both working on?
NATALIE: I’d seen her in multiple projects over the past couple of years but I’d never actually said hi to her, because they always separate union people from non-union, and we eat separate lunches, so there’s not that much commingling. So the project was Unleashed, a movie and it’s with Kate Micucci and Steve Howey, and that’s when we (Jackie and I) first started talking. I was Kate Micucci’s stand-in. She’s on Garfunkel and Oats

NATALIE: It’s been a pleasure, as well. Shout outs? Umm ….Jackie! I’m so proud of her for finally joining the union, and she’s already gotten like three feature films for this week, so ….congrats! Seriously, she’s already doing it, she’s running with it, she’s really getting all the union work she possibly can.

See more of Natalie at:
Her IMDb Page
Instagram

The above 2001 USC student short film Event, is a rarity in that it features Scream Queen Debra Lamb in one the few student films she starred in during the early 2000s. During this period,

Filmmaker and actress Mary-Madison Baldo (who’ll ask you to call her Madison, not Mary) has all the makings to realize her dream of hearing her name announced at the Oscars someday. Besides her talents, the