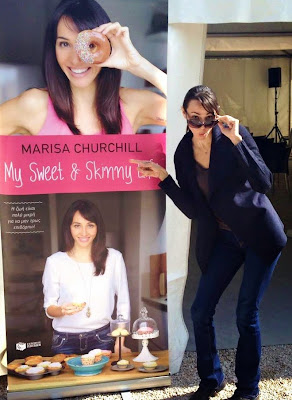 Celebrity chef Marisa Churchill is well-known for the low-cal pastries and desserts she creates that don’t taste low-cal. Her best-selling book, Sweet & Skinny: 100 Recipes for Enjoying Life’s Sweeter Side Without Tipping the Scales will tell you how she does it.

A graduate of the California Culinary Academy in San Francisco, and  the Culinary Institute of America at Greystone (in the Northern California city of St. Helena, where some of the region’s finest wine is made), Marisa has worked at some of San Francisco’s premiere restaurants, including Rubicon, which, unfortunately and despite having several celebrity investors including the late Robin Williams, shut its doors in 2008. Marisa’s TV appearances include her being a contestant on the second season of Top Chef. She’s also whipped up some of her specialties on The Talk, Access Hollywood as well as a few TV shows in Greece, a country she often visits, where she also enjoys culinary celeb status. When she’s not in the kitchen, Marisa, an avid swimmer, can usually be found at wherever the nearest pool or beach is.

I first contacted Marisa for an interview back in July of 2012, a few months after I caught her on the show Eye on the Bay and making note of her name. She promptly replied, stating she’d be happy to do an interview with me, but it just didn’t pan out. In January of this year, I decided to forward my original e-mail back to her, to see if we could then make an interview happen. She replied, it seemed like it might happen, but after a while, it still didn’t look like it was going to be, so I told her I’d settle for a “one question interview” if she’s just pick one of my questions to answer. So, citing her busy scheduled for not having the time to reply to all of my questions, she seemed to like that idea and answered one of my questions, and, for my patience, she said, answered a second. The above photo of Marisa was taken outside of the Kifissia flower show in northern Athens, Greece last month, where Marisa was on hand to whip up some of her famous Sweet & Skinny desserts for those in attendance.

(Author’s Disclaimer: I corresponded with Marisa through e-mail and I did not receive any confirmation it was actually her I was corresponding with, so I cannot say I’m 100% sure that Marisa’s fingers typed these replies to my questions ….but I’ll go as far as saying I’m 99% sure.)

CHRIS CHARLES: You’re famous for you low-fat and sugar-free desserts. Do they all taste just like “real deal” hi-cal desserts with all the sugar, or are there some where there is still a slight taste difference?
MARISA CHURCHILL: No, you can’t tell the difference. That’s the point with Sweet & Skinny. It’s not about cutting out all the fat, all the sugar. It’s about decreasing it to a 25%-50% calories savings, finding the sweet spot in the recipe where you can’t actually tell that anything has been altered.
CHRIS: I’ve read where you refer to the Ferry Building shops the culinary mecca in San Francisco. How often do you shop there?
MARISA: Yes, I think the Ferry Plaza Building is the place to shop. I try to go there at least once a month.
CHRIS: Any shops you’d like to mention for certain items? (and I hope you owners of these places appreciate the plugs.)
MARISA: I like Recchiuti for chocolates, Humphry Slocombe for ice cream, and Out the Door for a quick snack while shopping. Thanks Chris!
Marisa’s December 2014 appearance on KGO’s afternoon show, 7 Live,
showing hostess Lizzie Bermudez some of her Sweet & Skinny tricks.

As it’s coming up on the Halloween season, here’s the Queen of Horror in the San Francisco Bay Area, Reyna Young, better know by Bay Area horror fans as Miss Misery, with a teaser for