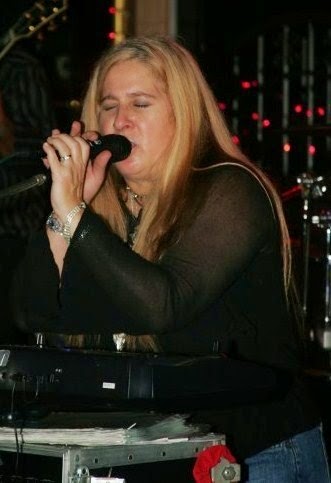 Scarlett Dark is the lead singer, keyboardist, and a founding member of the San Francisco Bay Area rock band, Lipshok. Their music is described as “progressive symphonic metal that is unique, gothic, haunting, melodic, ethereal, and highly commercial.” At one time a cover band, they now have three albums behind them with a fourth due out later this year, in which most of the songs are penned by Scarlett.

SCARLETT: You know, first I want to thank you for giving me this opportunity to talk about myself and my life. I think it’s important for girls to know that they can pursue their own dreams and don’t have to dumb it down for anyone. I have a wonderful husband, who is the bass player in Lipshok and that is how we met in the early 90’s. His name’s Phil, also known as “Chunky,” who has supported my singing and songwriting throughout all these years. And we have been working together on this Lipshok shit all this time. Of course, he has to move more equipment that me as I am a princess and I can’t lift most of my stuff so he helps me, plus I have trouble even plugging it in! (laughs) And we have a wonderful 17 year-old son, Devin, who is a fantastic drummer in his own bands and who’s been helping us sometimes, too. Devin doesn’t play tennis, and he doesn’t want to, but that’s okay. He’s a good kid who is turning into a great man and a great person of integrity and honor and we are very proud of him.

Official video for “Path of Stone,” the first single from Lipshok’s
most recent album The Soul of a Broken Mind
See more of Scarlett at:
Lipshok’s Facebook Fan Page
Lipshok’s Official Website

If you’re an Oakland Athletics fan and a regular at O.co Coliseum, then you’re probably at least casually acquainted with Jen Rainwater, known among A’s fans as the “Oakland A’s Socks Girl.” Even to say

I don’t know why the ad department at Motorola cast an Asian girl as Little Red Riding Hood for their new Droid RAZR M commercial, but Erin Tjoe makes a great one as she shows