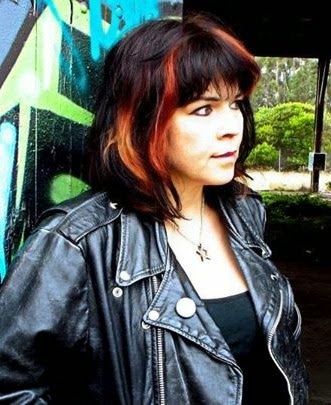 Singer and guitarist Caroline Bokman currently fronts the San Francisco-based punk metal band Dammit!, but she’s probably best-known by most fans as Caroline Blind, from when she was lead vocalist of Sunshine Blind. Described as a “goth/trip hop/darkwave” band, Sunshine Blind was co-founded by Caroline in 1991. Over the next 12 years, they extensively toured clubs throughout the US and released four studio albums before breaking up in 2003.These days, Caroline calls San Francisco home and she can be seen performing with Dammit! at many of the Bay Area’s premiere hard rock venues, such as Oakland’s Uptown Nightclub, Johnny V’s in San Jose’s and the City’s own DNA Lounge, where she reunited with Sunshine Blind for a show just last year.

What casual fans may not know about Caroline, is that she holds a BA in psychology and worked as a marriage and family therapist intern. She tells me her goal was to counsel bands and artists, who often have the same issues and dysfunctions married couples face, and those of us who have been in touring bands sure can concur with that. Caroline talks about that and more here in my recent interview with her. Other topics we cover are, why she doesn’t have a definitive home town, the possibility of further Sunshine Blind reunions, and her current gig with Dammit!, in which she now may be handling bass, as well as vocal duties, on a permanent basis.

Music video for “Release,” off of Sunshine Blind’s 1996 Liquid album

Celebrity chef Marisa Churchill is well-known for the low-cal pastries and desserts she creates that don’t taste low-cal. Her best-selling book, Sweet & Skinny: 100 Recipes for Enjoying Life’s Sweeter Side Without Tipping the Scales