The Latest
First off; she’s still alive and well, but it’s hard to believe it’s been nearly 11 years since Shim Mina was discovered while showing her support for her national soccer team during the 2002 World Cup. After being dubbed by the Korean media as “Miss World Cup” and gracing the covers of all the major sports newspaper in the country, Mina shortly thereafter released her debut album and quickly became a K-pop sensation.

Her star’s faded since her 2002 heyday, but she’s never dropped too far from the public eye. After her banner year, she released three subsequent albums and a few singles, the most recent being “Goodbye” in 2011.

Of course, before she became a household name in Korea and took center stage, she was a very active backup dancer, working it behind some of the most popular K-pop artists. In the above home video, shot circa 2008, Mina shows that she still remembers all the moves to the routine she did on stage with Park Ji-yoon for the latter’s 2000 hit, “Coming of Age Ceremony,” which has one of the sexiest K-pop dance routines ever. (The lead and backup dancer parts are practically identical.)

Mina’s been pretty much out of the spotlight the last couple of years, reportedly concentrating her efforts on the clothing line she launched last year called “Tamina,” which, according to her Wikipedia page, is said to be now defunct, but as of this writing, the website is still up. 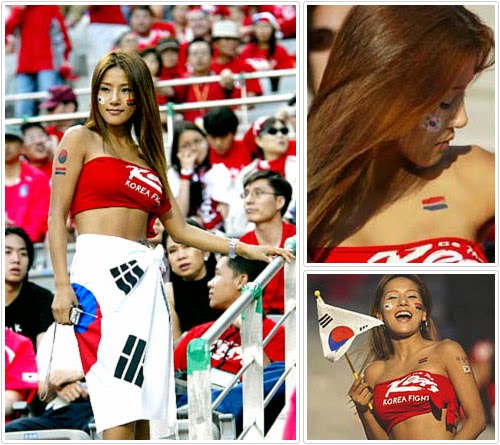 Mina at Seoul Stadium in June of 2002, sporting the look that landed her on the cover
of most of South Korea’s sports newspapers throughout the nation’s “World Cup fever.”

A selection of last commercials, performances, shoots, and messages from some of the Korean female entertainers who took their own lives within the last several years. Actress Jung Da-bin signed her last autograph with the words “be happy.”

Saturday Night Live Korea made its debut in December of 2011 and has since done quite well in the ratings. Closely patterned after the long-running “live from New York” original, SNL Korea is considered to

If you’ve seen the 2008 US Saturday Night Live skit with Beyoncé, that spoofs the making of her “Single Ladies” music video, then the March 2014 SNL Korea ripoff, with singer Park Ji-yoon and her