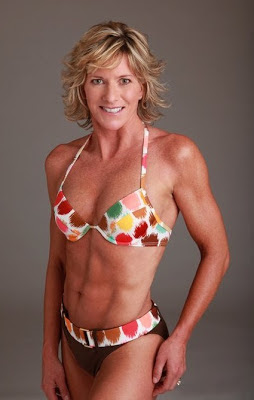 A native of St. Paul, Minnesota, Kate Cloutier studied drama at the University of Minnesota but didn’t start acting full-time until last year, when she decided to leave her career as an emergency medical technician. Besides knowing how to save lives, she also sings, plays guitar, substitute teaches, is a trained firefighter, and as you can see at left, is very serious about her workouts.

Kate jokingly said giving very detailed answers was part of her obsessive-compulsive disorder, but for anyone wanting to know what it takes to get in the shape you see she’s in, you’ll definitely appreciate the detailed rundown she gives on her workout routine. Oh, I should add the photo at left is from 2009 and Kate’s appearance has changed since. Her hair’s longer now. 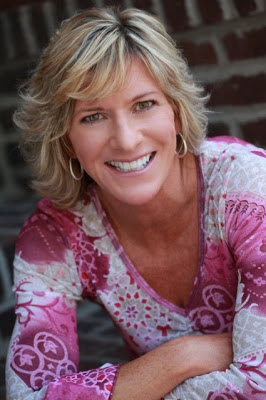 CHRIS: Haha! Yes Peggy Bundy, as well as the rest of the members of the Bundy clan, has become sort of a cult icon. So, what behind-the-scenes duties have you done on film projects, so far?
KATE: Lead stand-in on Lumpy. Worked up close and personal with Justin Long, Tyler Labine, Jess Wexler, Addison Timlin, and Shelley Long. Because of the budget, I was stand in for all. I was last girl standing. Went through four male stand-ins because they were not obedient. I learned to appreciate film crews. Everyone on set has such a timeline, and it was amazing to watch set crew create something in 15 minutes. Everyone on the crew works their bottoms off. Since my experience with Lumpy, I make it a point to thank the crew for their outstanding, hard work. I send a thank you e-mail to the director after a shoot to thank him, and also to mention his crew.
CHRIS: And believe me, the behind-the-scenes people do appreciate that. What projects are you currently working on?
KATE: I am in a TV pilot Sick of Normal. I am a superheroine/metahuman who is an ex-porn star. My ability is tracking. My kickboxing background helped me land this role. My name is Tracker/Sonja Rails. We just wrapped episode one this last Friday. Pepsi is one of our sponsors. Six episodes are written so far. Mr. Mystery Dinner Theater is ongoing. I just wrapped another music video pilot for A&E, and four auditions in one day, all within the last ten days. I have a meeting with Stepahanie Allensworth this Saturday. I met her two months ago, and after giving her my business card, she informed me that she will be contacting me. I honestly have been so busy with the holidays, my daughter, filming and performing, that I need to follow-up with her. Then. boom ….she came to me. Good feeling.
CHRIS: Anything unique you can tell me about yourself that isn’t included on any bio information you have online?
KATE: I am genuine and sincere. I front stab. If I have a beef, I will let you know. You will not hear it from others. When I go to an audition, I am very antisocial. Again, I am there to make friends, or chat with you if you are my friend. I am there to study my sides period. The ones that get it know the business, and I respect them. I despise third party hearsay. In conversation, if someone or a group of people are talking negative about someone, I do not chime in. I believe if you are going to talk about someone, let them be there to defend themselves. I do not believe in a nickname unless it is one you can call the person to his or her face. There should be no behind the back nicknames. My #1 pet peeve is inappropriate left lane usage. And lastly; if I encounter a funeral procession while driving, I turn off my radio to give the departed a moment of silence.
CHRIS: Well, now Kelly will no longer have bragging rights on you because you’ve been featured here too, Kate and it’s been a pleasure. I’ll keep an eye out for any future projects of your. In closing, any shout-outs to anyone?
KATE: Wow …I love Kelly. She is a true pro. I guess if I would give a shout out to someone, it would be Michael Thomas Cox. I have had the honor and privilege to work with this talented young man. He is an actor, just wrote a short film for Z Fest Film Festival, and will be directing that film as well. This guy is going places. We did a music video together, and have worked on three sets together, as well. 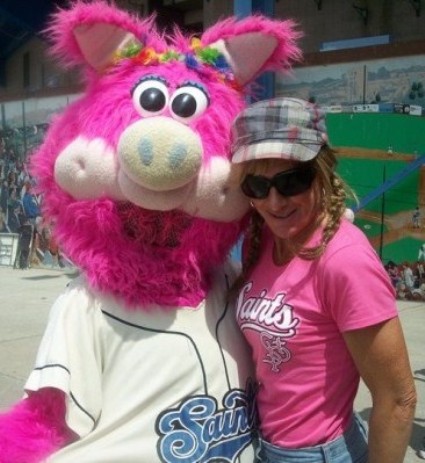 With the St. Paul Saints’ mascot, supporting her hometown baseball team
See more of Kate at:
Her Facebook
Her IMDb Listing

Actress and fitness model Krista Grotte’s “day job” as a project manager for a Florida-based aviation technology company, requires her to travel quite a bit, which would make one wonder how she also manages to

Gracing the above promo poster for the upcoming action-thriller Nation’s Fire is the multi-talented Krista Grotte, who was my recent guest on Eye on Entertainment. See the full press release by clicking below. Krista Grotte