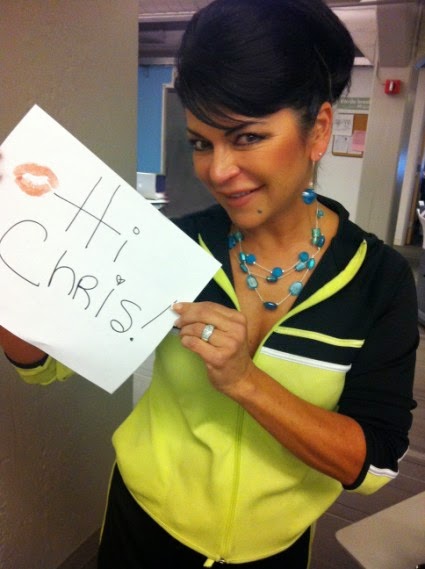 If you live in a metro area where there are several local news stations to choose watching, you might gravitate toward a particular one, for one reason or another. In my case, it’s KPIX Channel 5 in San Francisco, whose chief meteorologist is Roberta Gonzales. Besides having never been wrong about the weather, Roberta’s bio reads like that of the main female character in an action movie.

To say Roberta has a busy schedule is an understatement. Besides being in the studio Monday through Friday to deliver the weather report four times a night on live TV, she also delivers it every half hour from 3:00PM to 9:00PM on KCBS radio. Her days “off” are usually spent training for whatever the next marathon or triathlon she’ll be competing in and attending events for charities she actively supports. At one such event, she rappelled down a 38-story building. Oh, and if the San Jose Sharks are playing at home, the avid hockey fan can often be found in “The Tank,” cheering them on.

Just last evening, Roberta found time in between news broadcasts at KPIX studios, to personally answer my e-mail questions and send me the online hello you see above. Even though our correspondence was through e-mail, Roberta, obviously not one to put things off until later, replied to me so quickly, it was practically a real-time interview.

CHRIS CHARLES: Thanks for doing this, Roberta! I feel as if I know you personally since I see you almost every evening delivering the weather forecast on Channel 5.
ROBERTA GONZALES: Thank you! I have been forecasting weather On CBS 5 and KCBS Radio for 16 years, so glad I seem like a friendly face!
CHRIS: I know your weather reports are live at 5:00 PM. Are they also live at later times or are they rebroadcast?
ROBERTA: Everything is live! I am live at 5PM, 6PM, 10PM, and 11PM, Monday through Friday. In addition, I contribute weather reports to KCBS Radio at 3:18, 3:48, 4:18, 4:48 and so on until 9PM. It takes me two and a half hours of weather gathering of information, to prepare for two minutes on TV!
CHRIS: You have quite an impressive bio and have won many awards including four Emmys, and deservedly so. Have you ever won any award that was completely unexpected?
ROBERTA: The competition is so intense, every award is totally unexpected!
CHRIS: You compete in marathons and triathlons. What is your training regiment and how often do you train?
ROBERTA: My training depends on if I am preparing for an event like a marathon, Half Ironman or Ironman. So a normal week can range from 10 hours of training to 18 hours of training per week for an Ironman.
CHRIS: What would you consider the toughest ones you’ve competed in, so far?
ROBERTA: First Boston (Marathon) very difficult because of the stress. Second Ironman in Coeur d’Alene the most difficult because I had bronchitis.
CHRIS: I’ve been a regular (San Francisco) Bay to Breakers runner since 2008. Do you run in it every year?
ROBERTA: No, I ran the Bay to Breakers a couple of times, but it’s just too crowded for my liking.
CHRIS: Ahh, I see. You know, last year, the Bay to Breakers had a new main sponsor after losing their former one due to all the bad press the event received in recent years (“frat house” behavior, drinking, nudity, littering, etc.). There was also stricter enforcement of the event rules and local laws. Do you feel enough was done to bring it down to a more publicly-acceptable level or would you like to see further steps taken?
ROBERTA: Not sure what more you can do! It’s pretty hard to enforce any laws with a crowd that size! I know in Boston, they take the bibs off any runners seen “urinating” in public. It’s a disqualification. But I am not sure that would deter any B2B runner!
CHRIS: Haha ….well, it’s true that losing their bib isn’t a big worry for many B2B runners. Anyway, you support quite a few charitable organizations. According to your bio at CBS San Francisco, you founded a scholarship program for students entering the medical field. Please tell me a little more about that.
ROBERTA: My best friend died of ovarian cancer at the age of 34, so I started a scholarship in her name for any graduating student from our home town majoring in the medical field. I annually fund the scholarship solely, so it’s a huge responsibility.
CHRIS: What are some of your lesser-known hobbies and interests?
ROBERTA: I garden ….that’s a hobby! I LOVE to cook! And, I attended Church nearly daily.
CHRIS: I’m amazed that you can find time to do all these things. So, is there anything you miss about Chicago that you can’t find in San Francisco?
ROBERTA: The weather!
CHRIS: While doing research on you, I came across a blog post from January 2008 where you were one of the nominees in a “Hottest News Babe in San Francisco” poll. Have you seen it before?
ROBERTA: (Laughs) That’s hysterical. I’ll take it!
CHRIS: Being the one who delivers the weather report, do people sometimes approach you and complain about bad weather as if it’s your fault or you can do something to change it?
ROBERTA: All the time! People don’t like you to use “adjectives” to describe the weather. For example; “It’s a beautiful sunny day!” To some people, sunny is NOT beautiful, rain is. So I try not to do that. I’m serious!! I just say, “it was a sunny day today, blah, blah, blah…”
CHRIS: Well thanks again for taking some time out from your busy schedule to squeeze this in, Roberta. As always, I’ll look forward to seeing you in front of the Channel 5 Doppler radar map.

ROBERTA: Thank you Chris! Take care and thanks for being a friend!

From her December 2011 feature in Runner’s World magazine

See more of Roberta at:
Her Profile at CBS San Francisco
Roberta on Twitter

Actress and model Margaret Ann Garza began her show biz career competing in pageants in her native Texas, where one of her achievements was earning the crown as Miss Texas Latina.