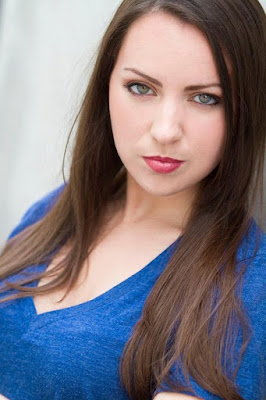 Like many of the other ladies I’ve interviewed, actress Marie Lynn has a strong background in dance, having studied several forms of it from a very young age. Unlike many of the other ladies I’ve interviewed, she has a B.A. in psychology and worked as a behavioral therapist for two years. That was before changing career paths to one that includes modeling in sexy 70s-style bikinis, running on a treadmill with a fake bomb strapped to her, and falling prey to psychotic killers on screen.

A native of Chicago, Marie didn’t fully get into acting until she was “old enough to sign her own release forms,” which is often the best choice for performers. She studied acting formally after moving to Los Angeles, where she currently lives. Besides credits that include roles in such films as Rules, Burlesque Massacre, and Afraid of Sunrise, Marie’s also landed parts on TV and has modeled for some of LA’s most talented and creative photographers, as her modeling portfolios show. In fact, it was very difficult choosing just several photos from them to go with this interview.

Marie’s most recent demo reel. In the first scene, her character has just found out her boyfriend
has been fooling around with a girl who works behind a perfume counter at a department store.
Her line “What do you think she sells? Chanel No. Shit?!” absolutely kills me.