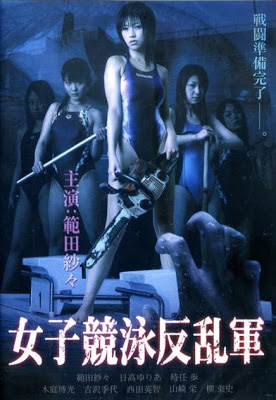 Carrying on in the spirit of the Halloween season, here are the ladies of another Japanese horror-comedy, the 2007 gorefest Attack Girls Swim Team vs. The Undead (aka The Girls Rebel Force of Competitive Swimmers and Undead Pool). The poster at left features star and former JAV idol (of course) Sasa Handa at center with the chainsaw, which is misleading because she wasn’t the one who used a chain saw in this movie. Anyway, to the left of Sasa is her fellow JAV veteran and co-star Yuria Hidaka, who is also given plenty of room to shine (if not swim) in this movie.

In a nutshell (since this isn’t a really review of the movie as it is a feature on the ladies who appear in it); an inoculation that’s supposed to prevent a virus that’s going around the school, turns those that get the shot into flesh-eating zombies. However, the members of the swim team aren’t affected and it’s later discovered that the chlorine in the pool seems to make them immune to the effects of the tainted vaccine. So, we have the swim team vs. the undead. If you have a collection of Japanese gore movies with gratuitous female nudity, this one is definitely worth adding to it. That is, if you don’t already have it. 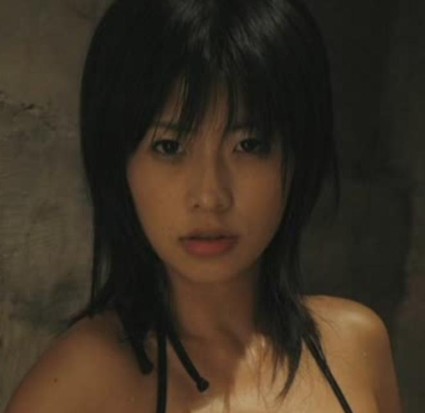 Sasa Handa (known during her non-AV days as “Chieri Haruyama”) plays Aki Kitashima, a new student with a mysterious background who possess the skills to fight the undead. If the character was written as being emotionless and wooden, then Sasa played this one to the T. However, I believe it’s safe to say that Sasa was cast in this role for at least two reasons other than her acting abilities, or lack of. She also appeared in the “Zero Woman” series’ 2007 entry, Zero Woman R, featured here. 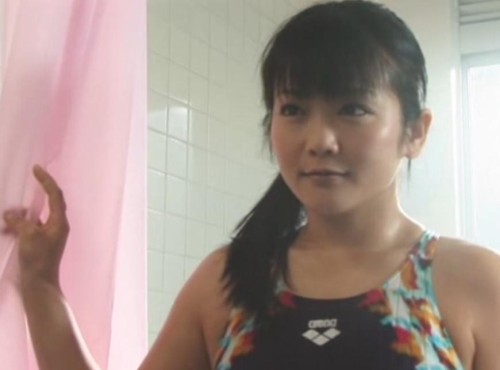 Yuria Hidaka plays Sayaka, who assumes leadership of the swim team after they lose their captain. She gives Aki a very warm welcome to the school and encourages her to join the team without even knowing if she can swim. She also reveals to Aki that they share some common physical traits (or so it seems) and a very special bond. There’s a very steamy shower and kitchen floor scene between the two in this film and the latter even made me forget I was watching a splatter-comedy ….even one with T&A. A little Googling on Yuria will reveal she’s done some pretty “extravagant” work during her JAV career. 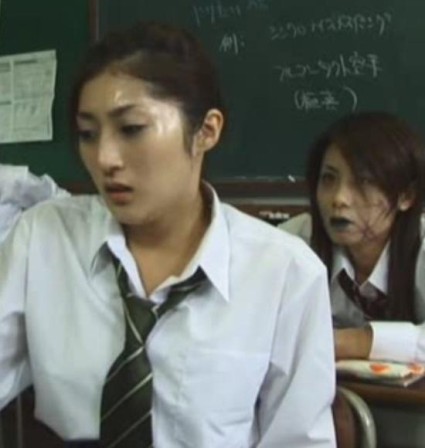 One of the prettiest ladies in the film, whom I wish would have had a larger part, is Mizuka Arai. In this still from the classroom carnage scene, she’s about to be a tasty bite for her zombiefied classmate sitting behind her. Sorry, but the few credits I was able to find on Mizuka, did not include AV. Her Livedoor blog (in Japanese and hasn’t been posted to in a couple of years) is here. 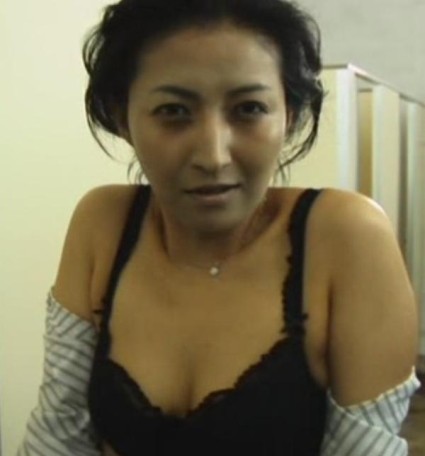 Ayumu Tokitô plays Miss Mariko, a teacher who becomes a sex-starved homicidal maniac after being infected with the strange virus, which also causes her (for whatever reason) to speak in English. However, it’s so poorly enunciated, the English subtitles remain during her crazy rantings. 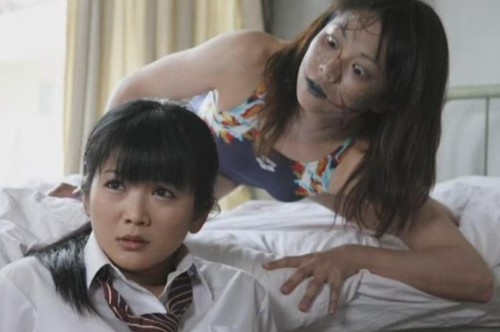 Tomoko is the first member of the swim team who succumbs to the effects of the virus
and demonstrates its symptomatic effects by trying to take a bite out of Sayaka. 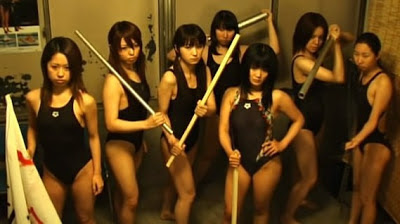 The swim team (minus Aki, who joins them later) in their “battle gear”
preparing to wage war against the zombies.
Official Trailer

Just when it looked like Jenna (played by Danielle Panabaker ) was going to get away from Jason toward the end of the 2009 Friday the 13th remake, she gets skewed and added to his

For this year’s Christmas-themed piece, here are a bevy of Japanese beauties appropriately attired for the season, beginning with JAV idol Kirara Asuka (above) shown here on the DVD cover of Chri Chri Merry Christmas.