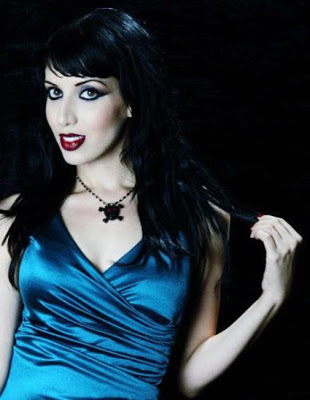 Actress and model Bianca Barnett has the kind of look you don’t soon forget (not that you’d want to). Bianca’s a girl whom, after seeing play a small part in a movie or music video, you scan the credits for or do research on because you have to find out her name to see what else she’s done.

A recent Golden Cob Award winner for best rising B actress, Bianca started out modeling in her native Texas but was convinced a few year ago to pursue acting so she moved to Los Angeles, where she made quite a mark on the B-movie scene. With films like The Devil’s Muse, In a Spiral State

to her credits, it may not be long before Bianca is referred to by B-cinema fans and critics by just her first name, like Brinke, Linnea, and company. I was recently fortunate enough (and able to show I wasn’t just some hack) to have Bianca, who currently lives in Baltimore, agree to an exclusive interview.

CHRIS CHARLES: Thanks for agreeing to be featured, Bianca. Once this is posted, if you scroll down the page, you’ll see you’re in some good company.
BIANCA BARNETT: Thank you so much for having me! I love doing interviews and it is wonderful to be in such lovely company.
CHRIS: I know you started out modeling. One of my favorite photos of you is from the the black and white “Evil” cheerleader shoot.
BIANCA: Thank you! I need to do another photo shoot in a similar costume one day because it was so popular.
CHRIS: Were you ever actually a cheerleader?
BIANCA: Oh no, I was never a cheerleader; in fact, I was the complete opposite in high school. I was taking advanced classes making great grades, but I hung out with the “weirdos” and “freaks.” I was very proud to be a part of the artsy, outcast crowd.
CHRIS: You’re now acting and majoring in performing arts. I understand it was a psychic that told you that you had more to offer so you went into acting?
BIANCA: Yes, I’m working on my Bachelors of Science degree with a minor in Performing Arts. Several years ago, I was told by a psychic in New Orleans that I should not just model as she thought I had too much to say. I still love modeling but my main focus now is my acting career.
CHRIS: What was your very first acting role?
BIANCA: My first “real” roles were in Ramzi Abed’s films, The Devil’s Muse and In a Spiral State

. After that came Albino Farm

which will be playing heavily on Showtime Beyond starting in September. (You can catch Albino Farms on Showtime and get an autographed DVD and photo of Bianca as the “Pig Bitch” at her shop.)
CHRIS: How about when you were a kid. Ever perform in any school plays?
BIANCA: I grew up taking dance and theater classes. The most memorable acting experience as a kid was in elementary school when our gym class did a version of “Thriller,” even though it had been released several years prior. My mom helped me with my costume by ripping up my clothes and burying it in the yard for a few days. My teacher loved how I crawled out of my crypt and told all the kids to watch how I did it and imitate me!
CHRIS: You stated you have many quirky and challenging roles under your belt. I’m guessing the role of the “Pig Bitch” in Albino Farm was at least one of the most quirky and challenging?
BIANCA: I honestly believe that great suffering can lead to enlightenment. Okay, that is a bit dramatic, but I am an actress! It was absolutely horrific wearing the makeup for so long (many times for over 12 hours) but I learned so much and have been so humbled by the experience. I am truly grateful that the film makers gave me the opportunity and took a chance with me as an unknown actress. I still cannot believe the movie is going as far as it has gone.
CHRIS: Ever take a role or modeling gig that you’d never do again?
BIANCA: Yes, I once sabotaged a role I had early on because it required a sex scene and I was not comfortable with it. I’m not completely opposed to nudity or a scene depicting sexuality, but it really has to be on a safe set with professional people to be worth the stress.
CHRIS: Have you had any bad experiences that made you consider a different career path?
BIANCA: Of course! I deal with liars, manipulators, drama queens, psychos, and amateurs all the time. It is completely frustrating to have to weed through the bullshit to actually find those that are serious and devoted to making their film successful while treating the cast and crew with respect.
CHRIS: You being a tall girl at 5’10”, I’d say that’s usually a big plus for you when it comes to getting selected for roles or shoots. Has your height ever been a disadvantage?
BIANCA: Sometimes it works great and other times it causes problems with egos. It is something I cannot control aside from what shoes I wear, but I love being tall and wouldn’t have it any other way.
CHRIS: I have to ask, since she’s another tall B-movie queen; have you ever worked with or would you like to work with Julie Strain?
BIANCA: I have never met Julie but from all accounts she is one awesome amazon! Her sister Lizzy was actually in some of my earlier films, In a Spiral State and The Devil’s Muse, both by Ramzi Abed.
CHRIS: Plan on staying with the horror genre or would you like to branch out more to comedy, action, whatever?
BIANCA: I love horror and would love to work on something with a higher budget that makes it to theaters worldwide. I also want to try other genres like action, comedy, and drama. I have been more selective of what I work on these days as I am trying to focus on quality rather than quantity.
CHRIS: You often appear at horror conventions. Any coming up in the near future?
BIANCA: I will probably be at HorrorFind Weekend as a patron and I will be at the B Movie Celebration to accept my Golden Cob Award in September. There are more but I cannot mention them yet until I am 100% positive they will happen. I put my appearances on my website.
CHRIS: A big congratulations on the Golden Cob. Those don’t come easy. I’d like to know if you have any interests, skills, or hobbies that you don’t put on your bio?
BIANCA: I am obsessed with nature, science, dioramas, and Sasquatch! My favorite courses are natural sciences or anything to do with biology, anatomy, physiology, chemistry, or microbiology. I also love hiking and camping and want to buy a home near a forest in the mountains someday soon. I am also passionate about old buildings and houses from the 1800s.
CHRIS: Yes, I can see that from the locations where you’ve done some of your photo shoots. Well, it was great to learn more about you, Bianca. I’ll definitely keep an eye out for your future projects. Anything you’d like to say to your fans who will be reading this?
BIANCA: Thank you all so much for your support over the years. Please check out my website and Facebook fan page to keep in touch!
See more of Bianca at:
Her Official Website
Her Facebook
Her Facebook Fan Page
Her Myspace
Her Model Mayhem Profile
Her IMDb Listing

Debbie D will very soon begin her fourth decade as one of the top Scream Queens in indie horror. Those already familiar with Debbie’s works, know that when it comes to getting bloody, bare, and bound, she has few equals.

Actress and producer Bianca Allaine talks Zombinatrix and more in her third exclusive interview with Idol Features. Initially announced last summer, as covered here, and set to start filming in April, Zombinatrix was co-written by

This interview with Scream Queen Kitsie Duncan was conducted back in December 2011 by Tom Heckbert for the now-defunct website Eyestrane.com. It’s been republished at Idol Features courtesy of Tom.