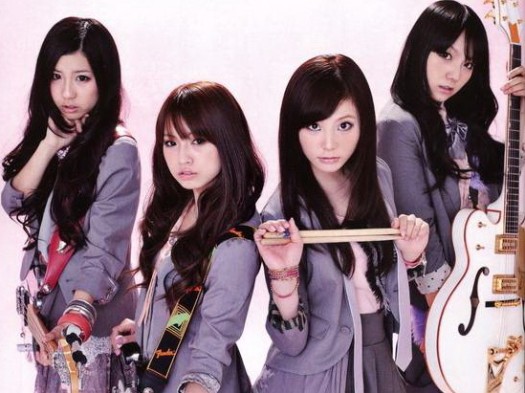 There seems to be a plethora of Asian all-girl vocal groups where the girls just sing (or lip-sync) while doing choreographed dance routines during performances. However, there aren’t as many Asian all-girl bands, where the members are performing the music as well as the vocals. Many of these bands are considered underground because their music is usually harder and not compatible with the sound of the more “bubble gum” girl groups that are so popular throughout Asia.

Even though Asian all-girl rock bands haven’t enjoyed as much widespread media exposure in their countries that their pop counterparts have, some have earned international fanbases. The prime example above is Scandal; four hot female rockers from Osaka, Japan. They are from left to right; Tomomi Ogawa (bass, vocals), Haruna Ono (vocals, guitar), Rina Suzuki (drums, vocals), and Mami Sasazaki (guitar, vocals). You won’t find these ladies on the same bill with Morning Musume.

Below are just a select few more examples of Asian all-female groups that rock and look great doing it. For those of you wanting to add a sample of this genre to your CD collections, anything from these bands is highly recommended.

Now defunct, Lorelei was one of the few Korean rock bands (male or female) who rose above underground status to appear on popular network music shows. As it’s common practice for Korean music shows to have groups lip sync, the girls probably didn’t have a choice but to fake it here in this “live” SBS television performance from 2003, but they really could and did, play. The members were; Jung Kyung-hee (lead vocals, rhythm guitar), Jung Hye-jin (lead guitar, vocals), Bae Soo-young (bass, vocals), and Kim Yeon-joo (drums, vocals). The nurse outfit Kyung-hee is wearing relates to the music video for this song, which is entitled “Diet.”

Taiwan’s Cherry Boom is composed of four former students at Fu Jen Catholic University; Zha-zha (vocals, occasionally guitar), Gua (guitar), Xiao-qian (bass), and Da-tian, (drums). This video is for their song “I Wanna Rock,” which is not a cover of the 1984 Twisted Sister song of the same name.

Hailing from Tokyo, visual kei death metal band exist†trace has released three albums to date. Jyou (vocals), Omi (guitar), Miko (guitar), Naoto (bass), and Mally (drums) are slated to make their U.S. debut at Sakura-Con 2011 in Seattle, Washington next month. The above is the video for their single “Resonance.”

Even though there are many other notable Japanese all-girl that bands that I’ll miss, 60’s surf rock-styled lady rockers, The 5.6.7.8’s definitely deserve inclusion here. Originally a quartet, there have been several personnel changes within the band and they eventually became a trio. Above are Yoshiko Fujiyama (guitar, vocals), Yoshiko Yamaguchi (bass, vocals), and Sachiko Fujii (drums, vocals) performing “I Walk Like Jayne Mansfield” in the izakaya scene from the 2003 movie Kill Bill.

Another Japanese all-girl group that definitely deserves inclusion here is Shonen Knife. Founded by sisters Naoko and Atsuko Yamano along with their friend Michie Nakatani in 1981, their sound was influenced by 70’s punk bands like the Buzzcocks and Ramones. In fact, they even performed a show in the 90s as a sort of Japanese female Ramones tribute band called “The Osaka Ramones.” They’ve also had numerous personnel changes throughout their 30-year history. The current trio is Naoko Yamano (guitar, vocals), Ritsuko Taneda (bass, vocals), and Emi Morimoto (drums, vocals). Above is them performing “Super Group” from a 2009 gig at Mohawk Place in Buffalo, New York. Former member Etsuko Nakanishi is on drums here.

Few former Playmates have gone on to acting careers successful enough to land starring roles in feature films. However, being a former Playmate does have its advantages when it comes to being cast in B-Movies.

Look Who’s on the Cover of Easyriders

Most of the ladies Easyriders magazine featured on their covers in the early days of the publication were not well-known or even professional models. However, some were professionals who were well-known in the adult entertainment industry.