A term coined by Justin Timberlake to describe the infamous 2004 Janet Jackson Super Bowl halftime incident, it’s only surprising that “wardrobe malfunctions” don’t happen more often, given the outfits many female celebs and models wear onstage and on the red carpet.

Above, we see Japanese-born K-pop singer Ayumi Lee head off stage for assistance after literally shaking off one of her adhesive bra cups during a 2007 lip-synced performance of her single “Wrongful Meeting.” Taking it in stride, Ayumi returned to the stage to finish the number after adjustments were made, probably realizing that it could have been worse, as some other ladies will attest to.

Back in 2000, then little-known Korean model/aspiring actress Jo Hyang-gi appeared on a TV show where the guests were given daunting feats to perform. Hyang-gi’s challenge was to dive into a swimming pool from a 11 meter high board. Rather than dive, she entered the water feet-first, which forced her bikini top upward to give the TV-viewing audience a brief underwater look at her uncovered bosom. Even though this incident seemed minor to me, I remember there being quite a buzz about it afterwards and there was even some speculation that Hyang-gi planned it to attract media attention. She denied that and was quoted as saying she’d even lost sleep over the incident. 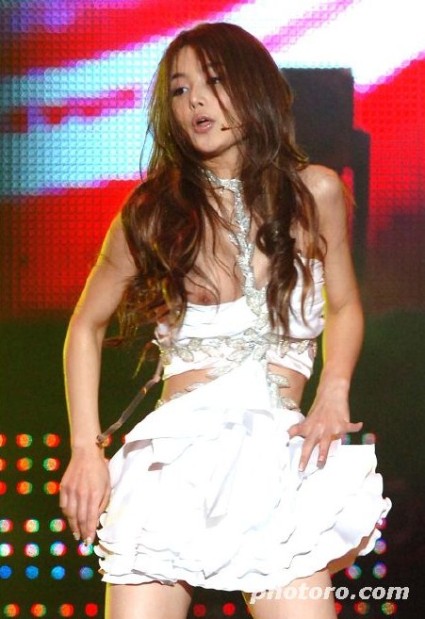 When she was still with the group “Seeya,” Korean singer Nam Gyu-ri gave her fans a little more than they bargained for when the strap supporting her dress broke during a performance at Seoul’s COEX Hall in December, 2006. Gyu-ri went on with the performance and even and encore, but she was reportedly so upset over her unintended exposure that she cried inconsolably backstage.

Even though it’s the opinion of some that these separate incidents were not merely coincidental bad luck, Hong Kong singer Yumiko Cheng has twice been the victim of wardrobe malfunctions. The first time was during a December 2006 annual charity show where, while attempting to perform a basic trapeze maneuver, her pants got pulled down, revealing her black thong underwear. She then fell to the net below, where she struggled to pull up her pants and regain her composure. She wasn’t completely successful at either.

Yumiko’s second exposure incident occurred in June of 2007 during a televised singing contest in Toronto. While she performed as a featured guest, she also provided the event with a featured breast.

One half of the Korean singing duo “Foxy,” Da-ham (featured here before) had some problems keeping her top closed during the filming of their music video. A faulty front bra clasp exposed her a total of three times before a wardrobe assistant came to the rescue with a safety pin. She reportedly stated of the incident “I have nothing to say about it. If you’re interested, please watch our music videos.” 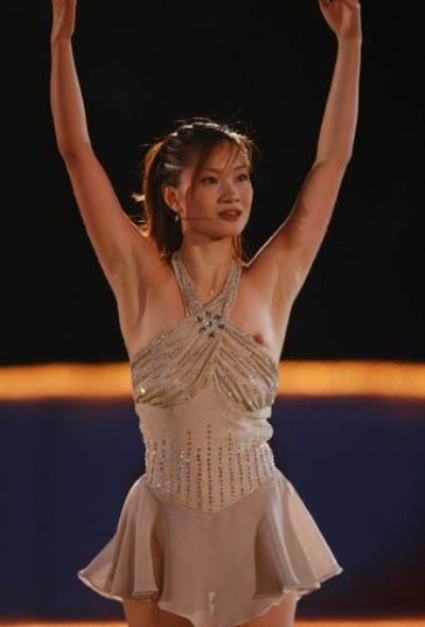 Hard to tell if she was unknowing or just uncaring about her “uncoverage” during this routine, Japanese Olympic gold medalist Shizuka Arakawa showed fine form in an outfit she obviously hadn’t worn before. More examples of why she should have fired her costume designer here. 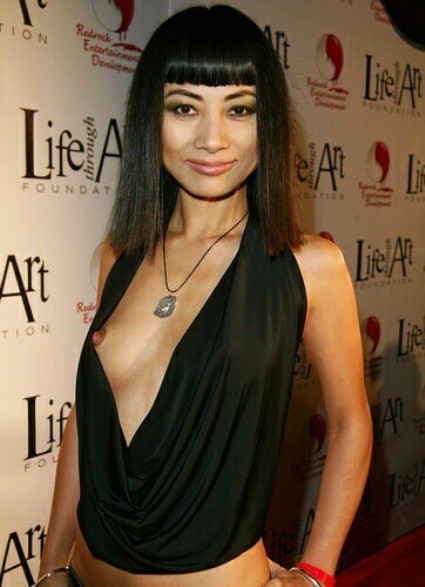 Since her public exposures occur far too often to be merely accidental, I shouldn’t ever bother to mention Bai Ling, but here’s a photo of one of her practically trademark nip slips at a Life Through Art Foundation event.

Sean Donohue’s indie slasher, Die Die Delta Pi, was probably shot a couple of years earlier than its year of release, judging by the looks of a couple of the actresses in the film. It’s not bad for a film of its type with a modest budget, but that’s mainly because of its female cast.

Kekko Kamen battles the evil forces at the “Spartan Institute of Higher Education,” run by principal “Toenail of Satan,” who takes sadistic delight in dishing out humiliating punishments to the female students, particularly pretty Mayumi Takahashi.