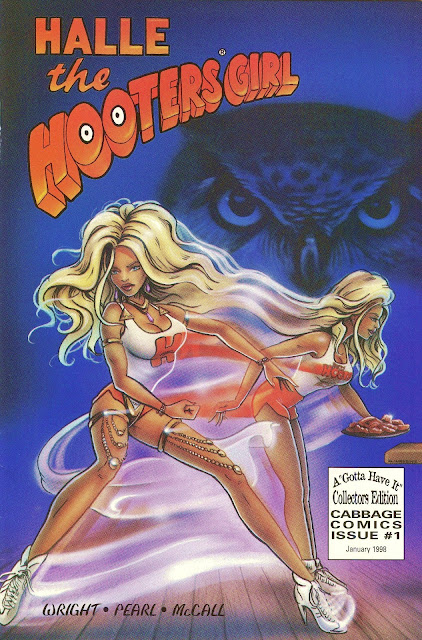 Halle the Hooters Girl was a short-lived comic book character that was the brainchild of entrepreneur Susy Johnson. Unfortunately, the buxom blonde chicken wing-serving heroine was so short lived, you’re looking at the cover of the one and only issue. It seemed that Cabbage Comics used the Hooters name, image, etc., without permission from Hooters, Inc., despite the fact that they stated in the issue that they did. So, after being threatened with a lawsuit, Cabbage Comics pulled the plug on Halle. I have no idea why the two parties didn’t work out a deal, since it could have been a real win-win situation, but they didn’t and the following are some panels and a rundown on the one any only adventure of Halle and company from the January 1998 debut and final issue.

The story introduces the reader to Halle, the “star” Hooters Girl at the restaurant she works at, her bitchy arch rival Mona, simple-minded but sweet Jill, and their boss Connie. Halle, Mona and Jill are sent to deliver a large order to the local Air Force Base. En route, their van is struck by a septic tanker truck and raw sewage is spilt into the girls’ van. The trio of ladies come out of it with no serious injuries but for some unknown reason, the mess from the truck, coupled with perhaps the sauce from the chicken wings Halle was munching on at the time of the accident, gives her super powers. (The first indication of this is when she was able to withstand the high-pressure force of the water from the fire hose while being washed down after the accident.)

Since this was the first and only issue, I’m merely assuming the sauce-sewage mixture is what gave Halle her powers since it was only she who was eating the wings at the time and it was only she who got super powers. It also wasn’t clearly defined exactly what super powers Halle possessed, but besides being able to withstand a high-pressure water blast, she’s able to transform herself (apparently unwittingly) into a crime-fighting diva when she senses trouble who uses a chrome-plated nut cracker as deftly as Captain America uses his shield. She’s also quite handy with assault weapons and chicken wings.

The bad guys here are a terrorist group who call themselves the “Mike Ditka Liberation Army” and have somehow made their was onto the Air Force Base to nab its plutonium to carry out their master plan to change the NFL back to the days the Rams were still in Los Angeles, the Cardinals were still in St. Louis, etc. Halle, after being transformed into her superheroine incarnation Halle thwarts the terrorist’s actions with the help of the aforementioned nut cracker, her fellow Hooters Girls, Mona and Jill. Oh, and an Uzi she lifted off one of her fallen foes.

Halle was based on actual Hooters Girl Janine Vollmer, who worked for the chain from 1993-1999. She now works as a makeup artist and is still involved with Hooters, often working behind the scenes on promotional shoots. The comic book can still be obtained from various sources (such as Amazon) fairly reasonably, considering it’s now quite a collector’s item. Of course, copies signed by Janine fetch the highest prices.