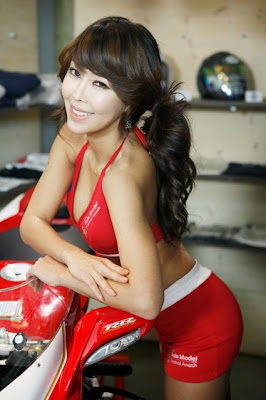 Racing and car show model Hana Hong is among the top ladies in her field in Korea. Her popularity as a model has even helped land her some parts in TV shows. However, since her exposure is pretty much limited to Korea, she’s received practically no press outside of her homeland. Of course, models like Hana often have their photos posted all over the net by Korean and non-Korean bloggers alike, but it’s very rare you’ll see an article or blog post where the author has actually contacted one of these ladies and received a reply from her worthy of publication.

I sent Hana a message through Facebook and asked if she’d like to be featured here and if she’d mind answering a few questions. She gave me a positive response and asked me to e-mail her about it. Knowing it could have been a brush-off, I sent Hana some questions anyway, thinking there’s always a chance of getting a reply. As it turned out, I was pleasantly surprised when Hana replied the next day with answers to some of my questions.

(Author’s Disclaimer: I really can’t consider this a full, much less an in-depth, interview since Hana just gave the “standard” replies to just a few of the questions I sent her and even though I have no reason to doubt it was actually her who replied to me, I can’t say I’m 100% sure it was, but I’ll go as far as saying I’m 99% sure.)

CHRIS CHARLES: How long have you been modeling professionally?
HANA HONG: I’ve been a model for 12 years now.
CHRIS: Besides car shows and racing events, what other types of modeling do you do?
HANA: Besides being a car show and racing model, I have also modeled for commercial advertisements, and done fashion, and magazine modeling. I’ve also done some singing and acting.
CHRIS: Have you appeared on Korean TV or in any movies?
HANA: I’ve appeared on various cable TV variety shows and dramas. I’ve also done commercials and appeared on Music Bank (a popular Korean music showcase program).
CHRIS: Do you know you have fans from other countries?
HANA: It feels really good to have overseas fans. There’s a pressure on me to be as good as foreign models.
CHRIS: Is there anything you’d like to say to readers and fans outside of Korea?
HANA: I will work hard and do my best. Please support and encourage me. I will not lose sight of my original intention as a model. (Author’s Note: Sort of the standard statement a Korean entertainer gives to fans at the end of an interview.)

Hwang Mi-hee (26) is currently one of the most popular and most photographed racing/car show models in Korea. The above video is from her appearance this year at the Korean Supercar Exhibition in Daegu. According

Model Kanny Theng first caught my attention at hottestblogger.com, where she was one of the many Singapore girls featured. (Michelle Phan, also featured there, is one of the few from the U.S.) Even though that