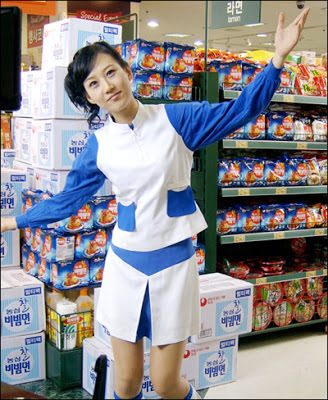 Not to be confused with racing or car show models, narrator models, also called “doumi,” (Korean word for “helper”) have been a fairly common sight on city sidewalks and in stores of South Korea since the early 90s.

Hired through agencies by businesses promoting grand openings, special events or sales, these ladies can be found outside the entrances to night clubs, restaurants, stores, or even in supermarkets like Jang Yoon-jeong, the lovely lady pictured at right (and not to be confused with the singer of the same name). Their duties include such things as handing out flyers and promo freebies, delivering sales pitches, and dancing to pulsating techno music pumped out by large PA systems under archways of colorful balloons. In addition to their appearance, these girls are chosen through auditions for their speaking and dancing abilities, and have to be of a certain size, in order to fit into the outfits provided to them.

There aren’t too many images of these ladies around the net (and I state that after searching Korean portals for them) and one reason for that is, despite their high visibility while on the job, a lot of narrator models aren’t too keen on having their photos taken, which is something this blogger will cosign to. The snapshots below are from my personal collection, all taken by yours truly.

Renowned pinup artist and photographer Mike James’ camera has been capturing out-of-this-world sexy models over 20 years. Often in costumes he creates himself, the ladies’ poses and themes range from the outrageous to the fairly mundane.

Ringing in 2014 is the very lovely actress Terissa Kelton, whom I had the pleasure of interviewing back in April of 2012. After contacting Terissa a couple of weeks ago, regarding her being part of

Even though their music is usually harder and not compatible with the sound of the more “bubble gum” girl groups that are so popular throughout Asia, some Asian all-girl rock bands, that are the real deal, have earned international fan bases.